This coming Saturday at T-Mobile Arena in Las Vegas, former two-division champion Conor McGregor and Donald “Cowboy” Cerrone will headline the UFC 246 main event with a welterweight bout. In other action bantamweights Holly Holm and Raquel Pennington are scheduled for a rematch after their date in 2019 was scuttled due to a Holm’s injury.

McGregor last won a match more than three years ago, and will be seeing his first action in over a year, but he remains the UFC’s biggest draw. A win would improve McGregor’s record to 18-4 and immediately have him back in the mix for a title bout. 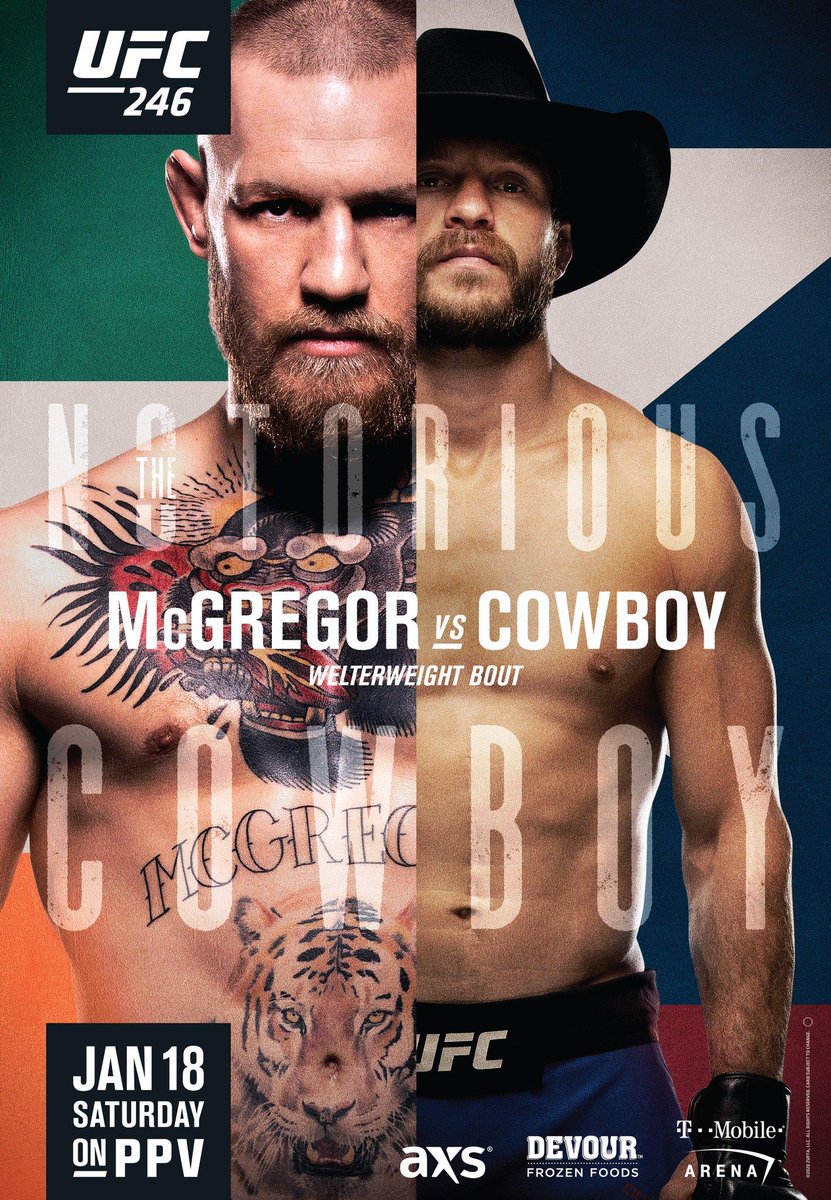 Cerrone, who owns the UFC record with 22 wins, will be looking to add to that total after dropping fights to Tony Ferguson and Justin Gaethje.

On Episode 1 of UFC 246 Embedded, McGregor pushes himself at UFC Performance Institute. Bantamweight Raquel Pennington and fiancee Tecia Torres prepare for “Rocky’s” rematch with Holly Holm… for a second time. After the long drive to Las Vegas, Cerrone explores his digs then heads straight for the gym. And strawweight Claudia Gadelha arrives from a low-temperature, high-motivation training camp.

On Episode 2, Cerrone enjoys the blue collar side of Sin City. Pennington and Torres unwind with a dog park visit and pedicures. Lightweight Diego Ferreira arrives in town with his wife and son for their first fight week in Las Vegas. Irish star Conor McGregor fakes his way through an interview about college (American) football and gets in another training session at UFC Performance Institute.

On Episode 3, Pennington and Torres do meal prep at home and compare weight-cutting moods. Headliner Cerrone trades pre-fight hijinks for family-friendly Las Vegas sightseeing. His opponent McGregor joins forces with bantamweight Holm at athlete check-in. And fight week obligations are underway for stars of the card including lightweight opponents Diego Ferreira and Anthony Pettis, plus strawweights Gadelha and Alexa Grasso.

On Episode 4, McGregor takes questions and photos. Pennington sweats out the effects of a long flight, while opponent Holly Holm clocks familiar names on the Ultimate Fighter jersey wall. Fans pack the Palms for a press conference between McGregor and the fittingly-dressed “Cowboy” Cerrone, with football star Chad Ochocinco in attendance.

On Episode 5, Cerrone recovers at the Performance Institute alongside flyweights Maycee Barber and Sabino Mazo and Hall of Famer Forrest Griffin. Grasso prepares to fight one of her heroes, and McGregor enjoys fight week as a welterweight. At Ultimate Media Day, Pettis and Ferreira face off, as do Holm and Pennington.

On Episode 6, relaxes in the comfort of making an easy weight cut to 170 pounds. Pettis discusses how his technique of handling his own weight cut helps him. McGregor shows up to the UFC 246: Ceremonial weigh-ins with his son and crowds roar as the headliners position for a final flex and faceoff, before delivering their thoughts in anticipation for the fight.