Long before the advent of the UFC and the subsequent proliferation of MMA gyms from coast to coast, a young man wishing to take a stand against a bully could find wishful solace in any number of comic book ads promising physical superiority. The earliest of these, and most enduring, featured Charles Atlas…

In the early 1900s, an Italian-immigrant Brooklynite by the name of Angelo Siciliano, transformed himself from a “97-pound weakling” into a statuesque bodybuilder. The bulked-up Siciliano Americanized his name to Charles Atlas and paired with fitness writer Dr. Frederick Tilney to produce a strength-building system which later came to be known as “dynamic tension”. 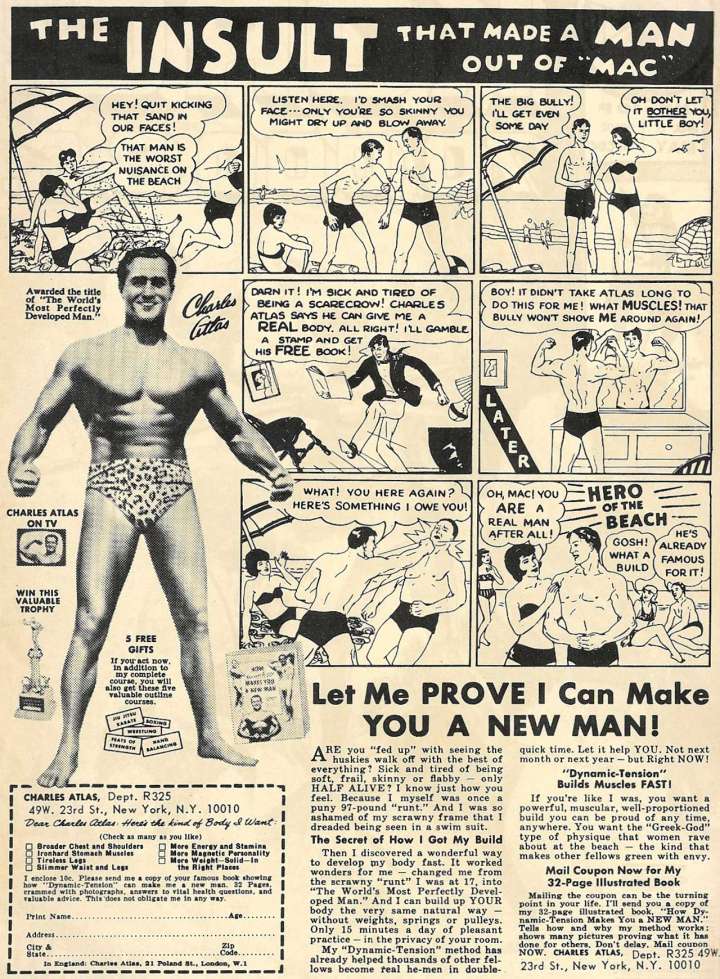 A hagiographical single-page comic depicting Atlas’ journey from zero to hero first appeared as an ad in boy’s magazines, before becoming a fixture in comic books starting in the 1940s. A couple formulations of the “The Insult” were made, both of which chronicled a bullied beachgoer’s speedy transformation into a hunk of vengeful punching power. 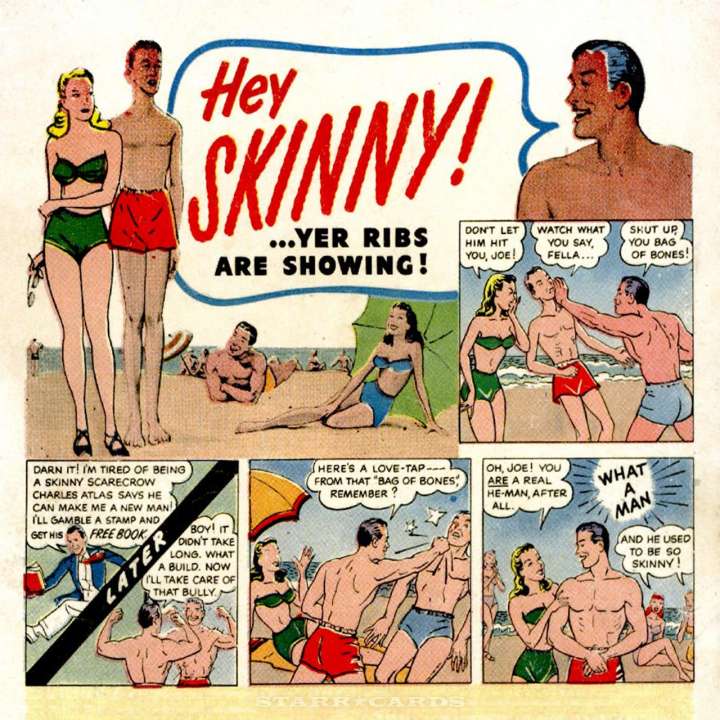 Atlas’ mail-in offering included free “outline courses” in jiu jitsu, boxing, wrestling, feats of strength and hand balancing to become the first de-facto mixed martial arts program. As dojos started popping on every other street corner in the United States, Atlas’ alpha-male regimen was forced to competed with a slew of other over-the-top alternatives on the pages of comics from Archie to The Amazing Spider Man. 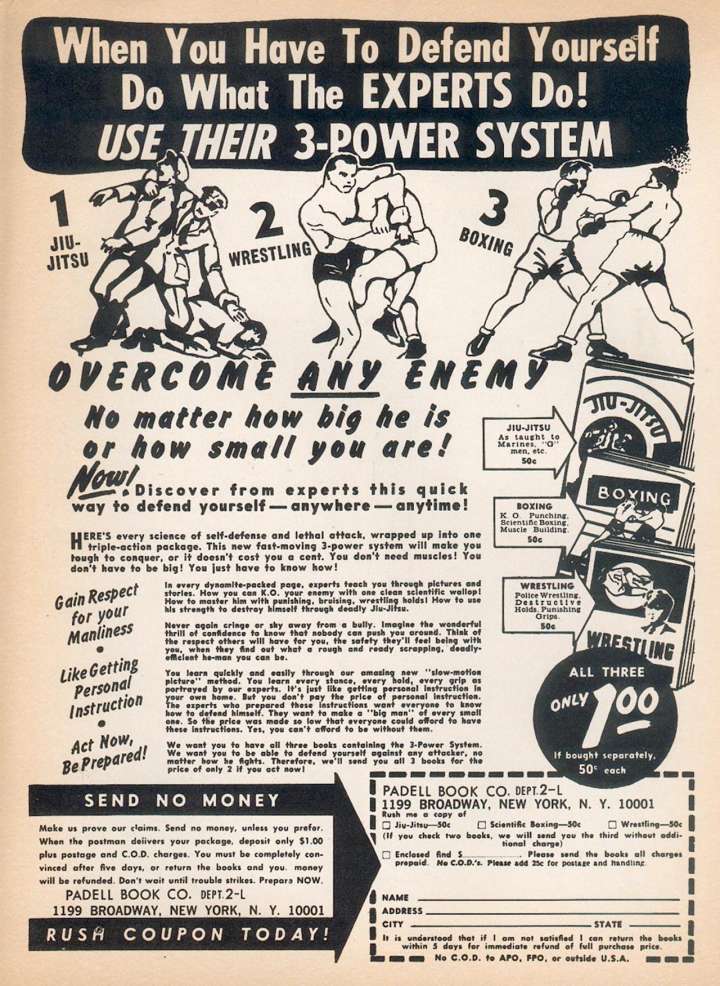 ''Never again cringe or shy away from a bully. Imagine the wonderful thrill of confidence to know that nobody can push you around.'' 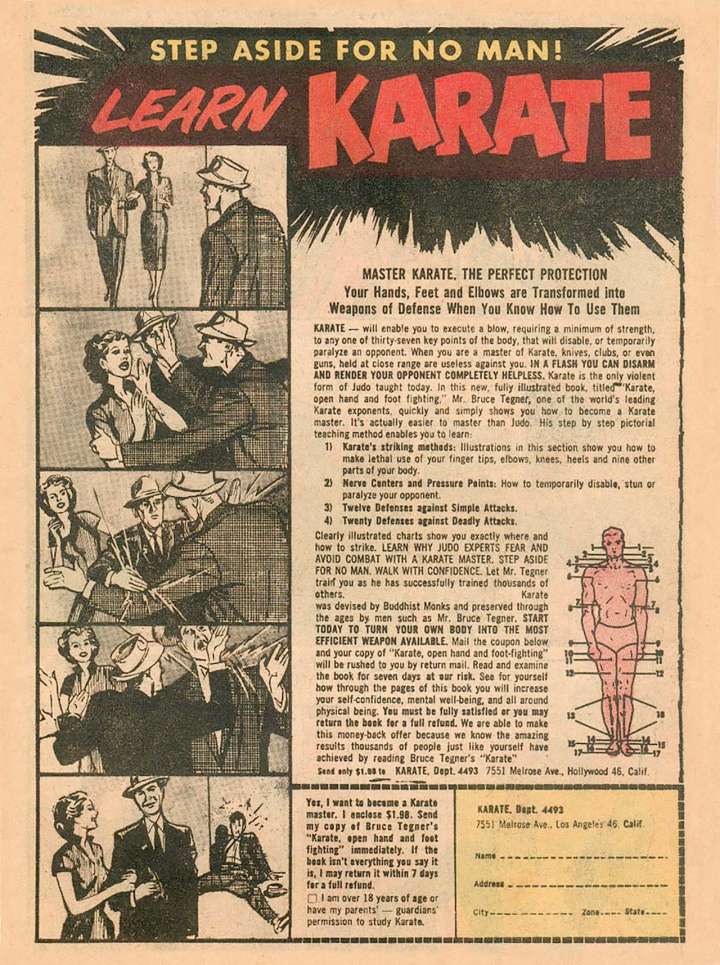 ''When you are a master of Karate, knives, clubs, or even guns, held at close range are useless against you.''

POWER FOR SELF DEFENSE 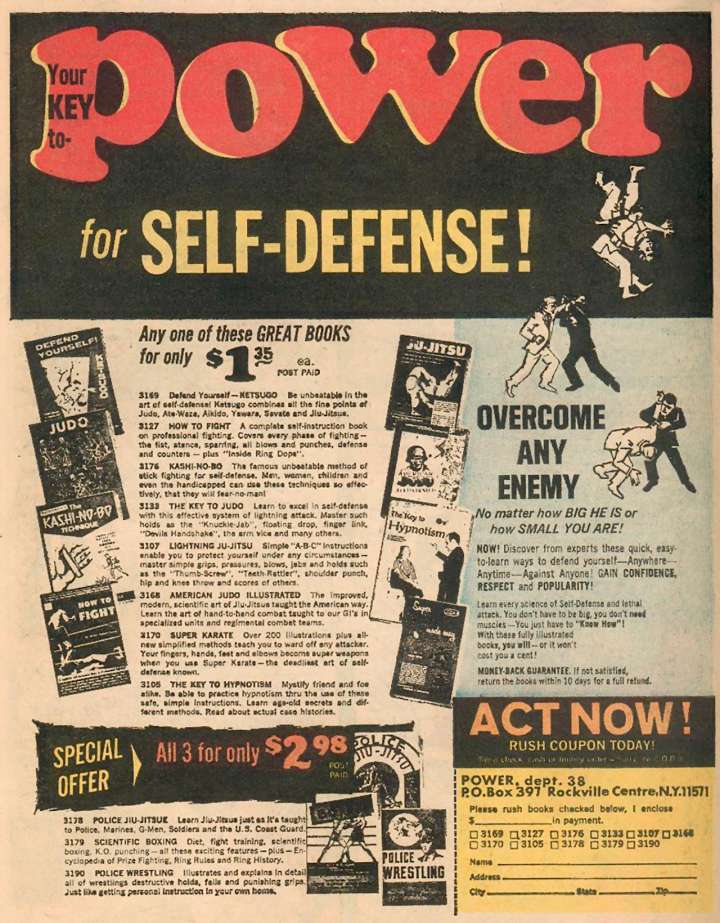 ''Discover from experts these quick, easy-to-learn ways to defend yourself — Anywhere — Anytime — Against Anyone! GAIN CONFIDENCE, RESPECT and POPULARITY!''

— Power for Self Defense ad blurb 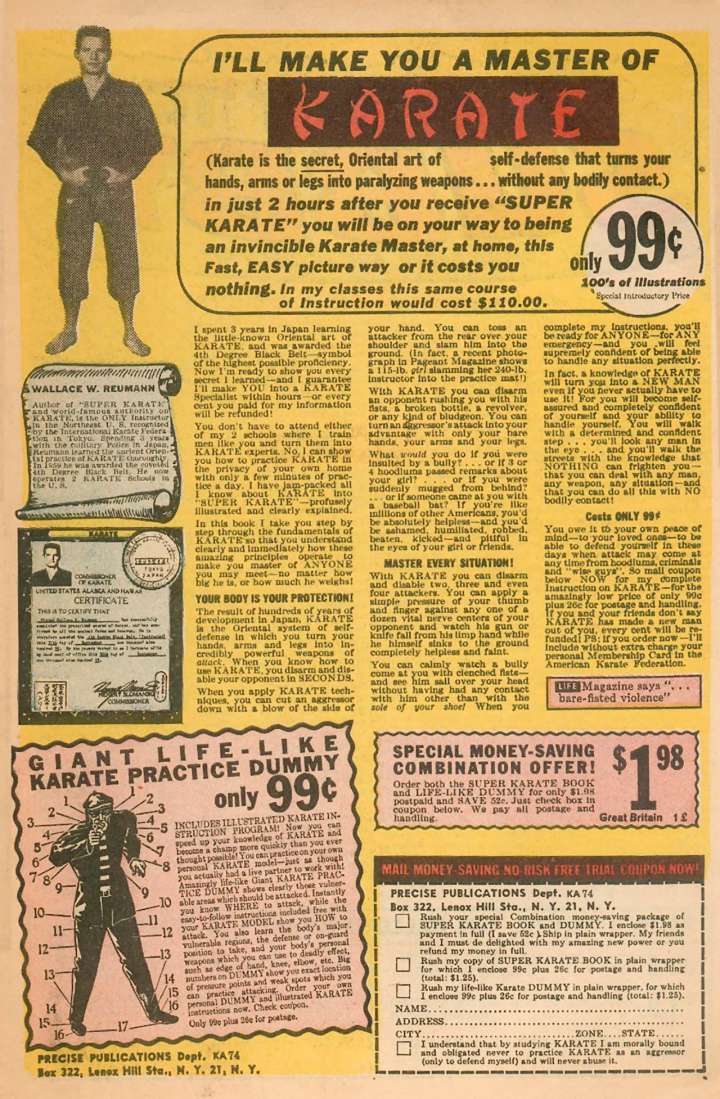 ''Karate is the secret, Oriental art of self-defense that turns your hands, arms or legs into paralyzing weapons... without any bodily contact.'' 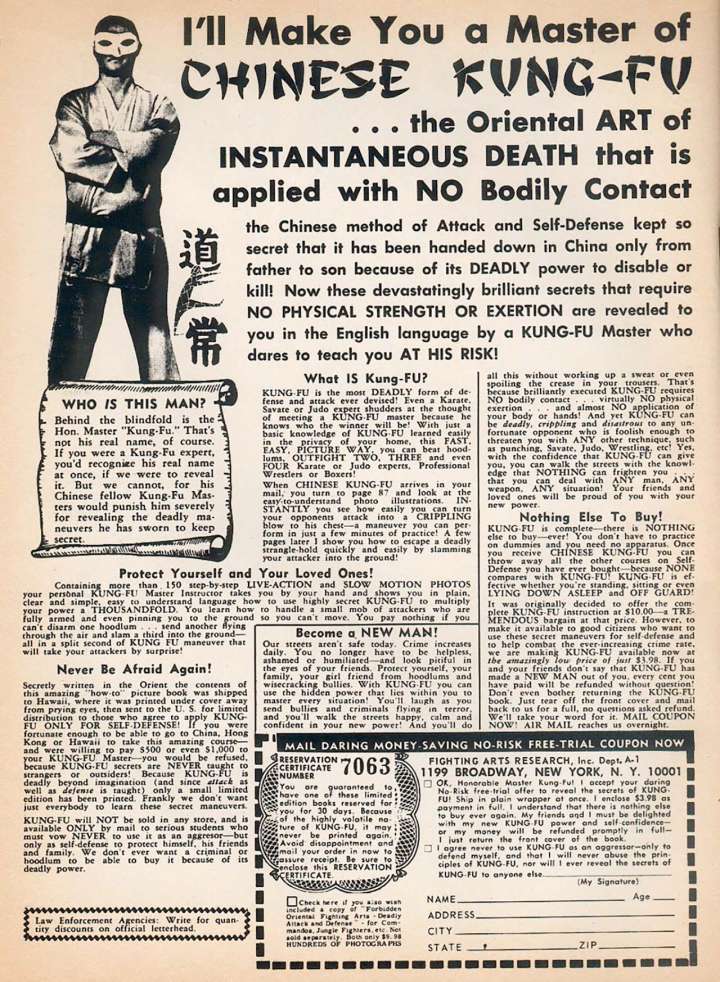 ''You'll laugh as you send bullies and criminals flying in terror, and you'll walk the streets happy, calm and confident in your new power.'' 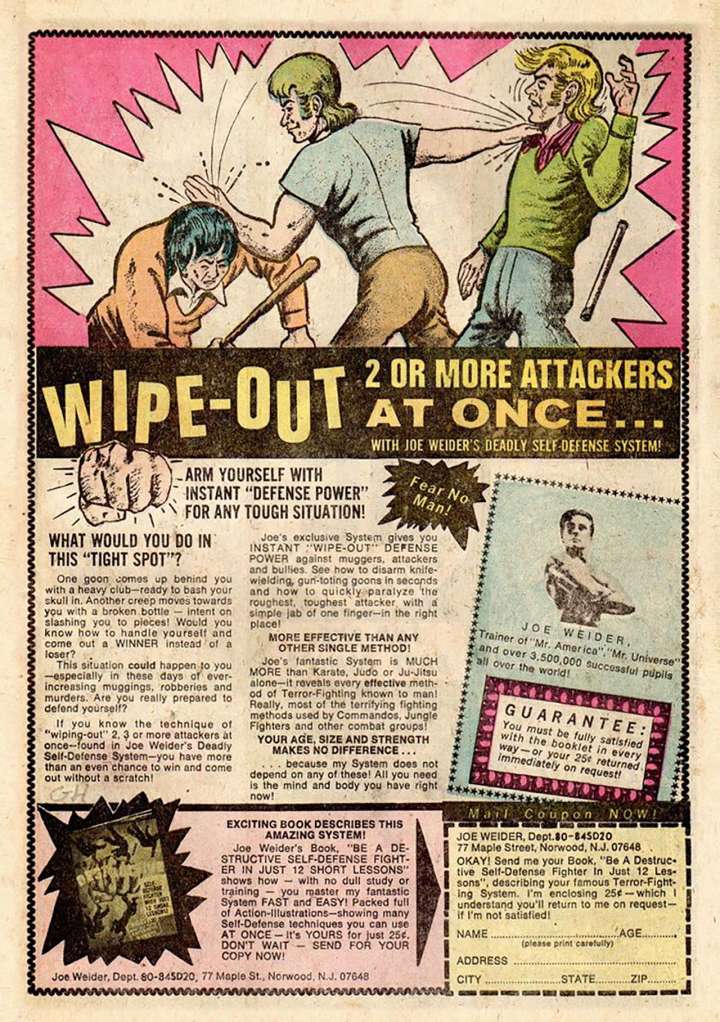 ''See how to disarm knife-wielding, gun-toting goons in seconds and how to quickly paralyze the roughest, toughest attacker with a simple jab of the finger — in the right place!'' 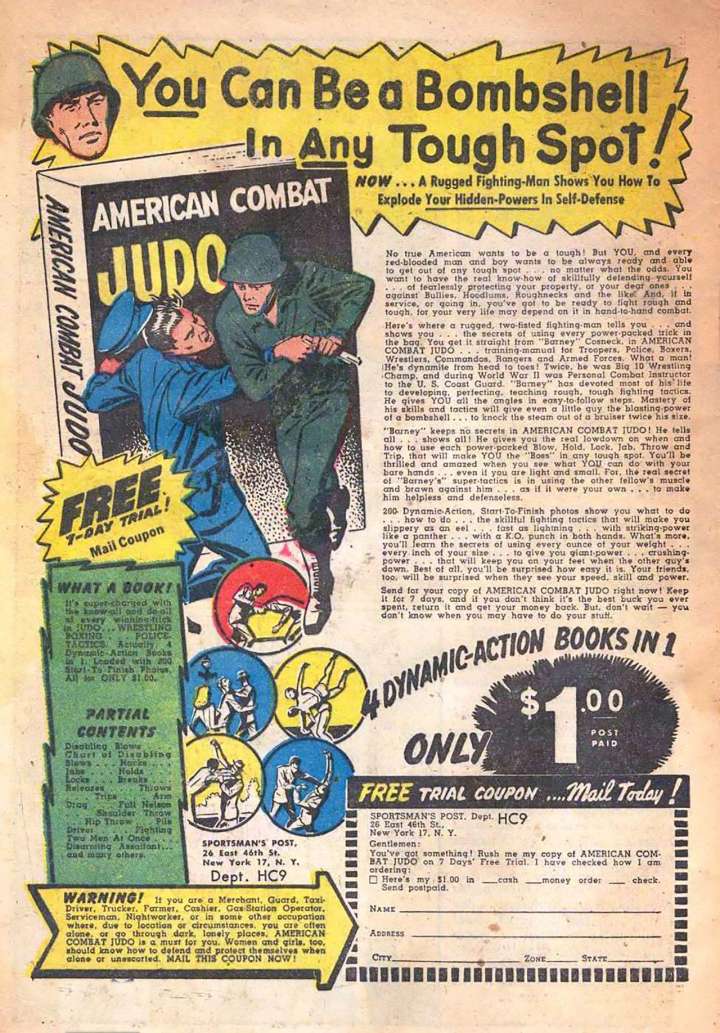 ''Mastery of his skills and tactics will give even the little guy the blasting power of a bombshell... to knock the steam out of a bruiser twice his size.''

Of all the increasingly braggadocious and menacing ads, none could match the outrageousness of Count Dante’s “Dim Mak Death Touch”, which appeared regularly in comic books of the 1970s. Dante, born John Keehan, was a martial artist from Chicago who wildly reimagined his personal history to claim Spanish nobility and weave a tale of having participated in secret death matches in China and Thailand. 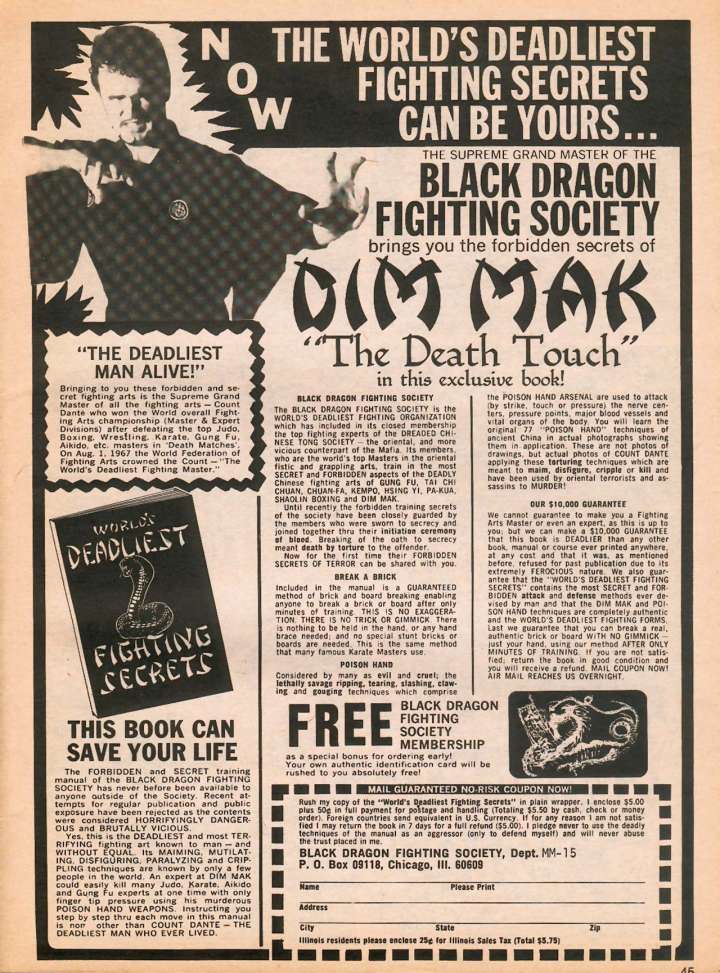 ''An expert at DIM MAK could easily kill many Judo, Karate, Aikido, and Gung Fu experts at one time with only finger tip pressure using his murderous POISON HAND WEAPONS.'' 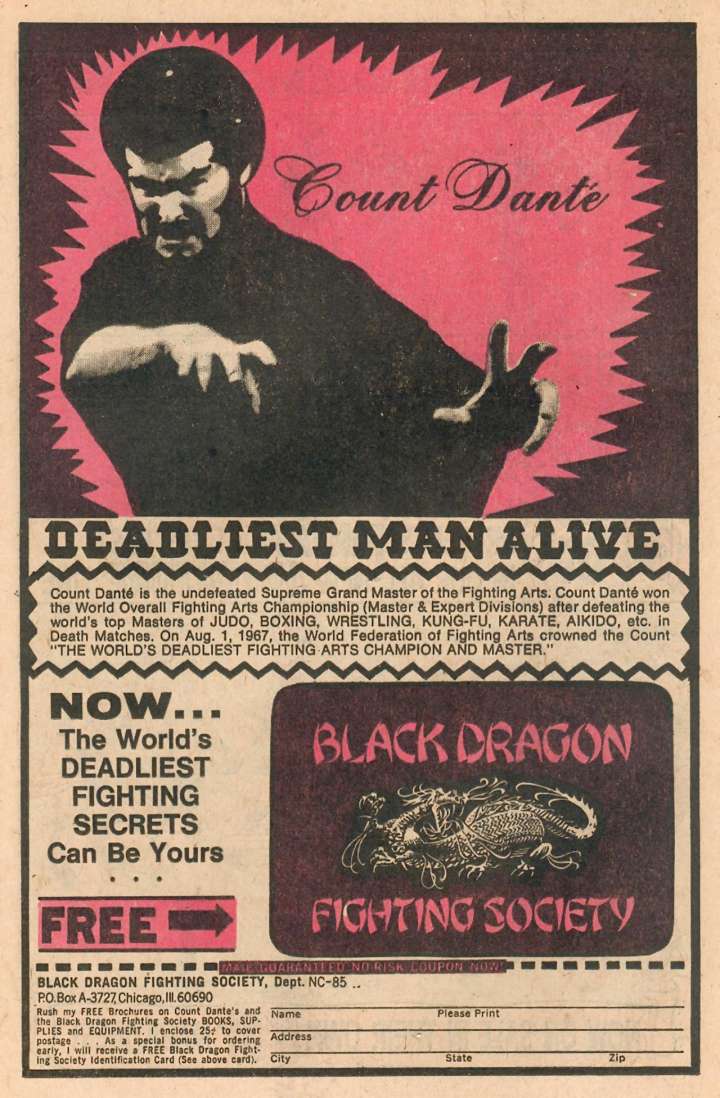 Dante, who supplanted martial arts income with work as a hairdresser, died of a bleeding ulcer in 1975. Among the more colorful aspects of his enigmatic story were his involvement in Chicagoland dojo wars that cost a student his life, and being a suspect of interest in the notorious 1974 Chicago Purolator vault robbery in which 4.3 million dollars was stolen.