Brazil is holding Neymar Jr. out of the Copa America so he will be rested for the Olympics, but that didn’t keep the Barcelona striker from coming to the United States for an epic celebrity-filled vacation. 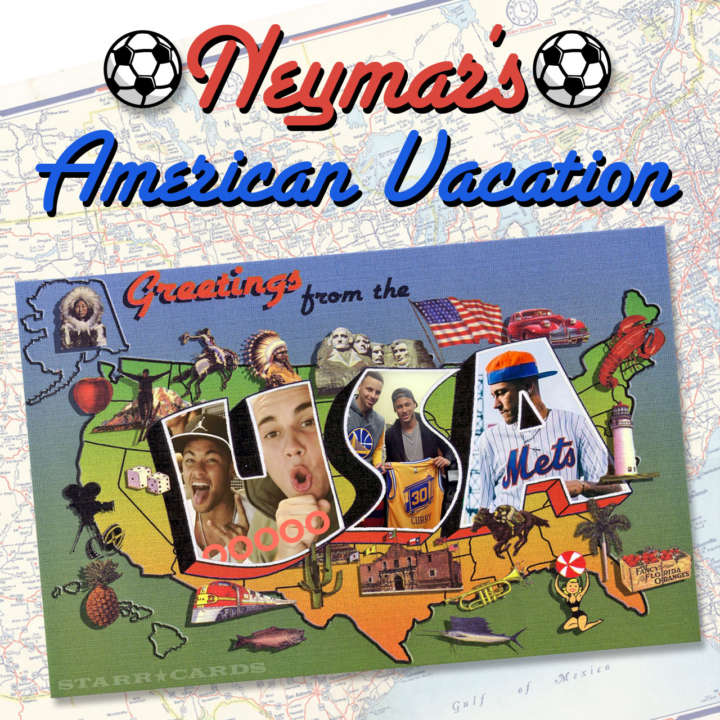 Just a week into his visit, Neymar has tried his hand at baseball, met with the greatest basketball player of all time, hung out with the world’s biggest pop star, and swapped jerseys with the reigning NBA MVP.

BASEBALL IN THE BIG APPLE

Neymar started off his American vacation right, with a visit to New York City for a baseball game. While a Yankees game might have made for more iconic first taste of America’s Pastime, front row seats at Shea Stadium for a Mets-White Sox matchup ain’t too shabby.

Batting practice, on the other hand, didn’t go so well…

Next up was a visit with Michael Jordan. Neymar recently became the first soccer player with a boot endorsed by the basketball legend. The new limited edition NJR x Jordan Hypervenom is available now, and will only set fans back a couple Benjamins.

''I've always admired Michael Jordan, so to collaborate with him and have his icon on my boots means a great deal to me.''

KICKIN’ IT WITH THE BIEBS

Neymar headed to the Left Coast to take in Brazil’s Copa America Centenario debut match with Justin Bieber, who documented the outing with a series of selfies. The game proved exciting, even if all the on-field action resulted in a 0-0 tie.

Afterward, Neymar hung out with Bieber at his posh Southern California pad, where the pair kicked around a soccer ball. Bieber capably controlled the ball with both kicks and headers, demonstrating he may be more suited for a post-singing soccer career rather than basketball.

Neymar, showed off his Stephen Curry-esque dribbling skills on Instagram, then flew up the coast to the Bay Area to catch Game 2 of the NBA Finals between the Golden State Warriors and Cleveland Cavaliers.

After the game, Neymar hung out with the victorious Warriors (which happen to be the only team in the NBA that is 2/15 Brazilian). Curry scored his second signed FC Barcelona jersey of the year, when Neymar gifted him his No. 11.

Brazil faces Haiti in Orlando tomorrow, so if Neymar attends — as is expected — he will have the opportunity to take in one of the Disney theme parks or perhaps party with Dwyane Wade down in Miami after the match. Stay tuned…