Super Bowl 50 will be held on February 7 at Levi’s Stadium in Santa Clara, California, and just as assuredly as Coldplay will take the field on that day, neither the Cleveland Browns nor the Detroit Lions will. Only four NFL teams have never appeared in a Super Bowl; the aforementioned pair and the Jacksonville Jaguars and Houston Texans — but of the four, only the Browns and Lions have been in the league every year since the first Super Bowl.

The Lions last playoff victory came on January 5, 1992, in the divisional round game against the Dallas Cowboys. Over the past half century, Detroit has found an impressive number of ways to lose games, perhaps none as impressive as their game with the Green Bay Packers on Thursday night.

With no time on the clock, the Lions seemingly had the game in hand. But a 61-yard prayer from Aaron Rodgers to Richard Rodgers helped the Lie-downs stay true to form. The reaction of Detroit Don and Superfan (in the video above) nicely summed up the mood in Ford Field.

Matthew Stafford and Calvin Johnson similarly expressed their despair from the sidelines.

The Browns last playoff victory came on January 1, 1995 in a wildcard game against Patriots. Johnny Manziel was just two years old at the time, and had no idea how he would play into the team’s subsequent record of failure.

Adele’s mournful “Hello” serves as the perfect soundtrack to the Browns blunders.

With as long as the Lions and Browns have been mind-numbingly bad, it’s hard to fathom that both teams were the cream of the NFL crop during the 1950s — yet that’s what the record books show. 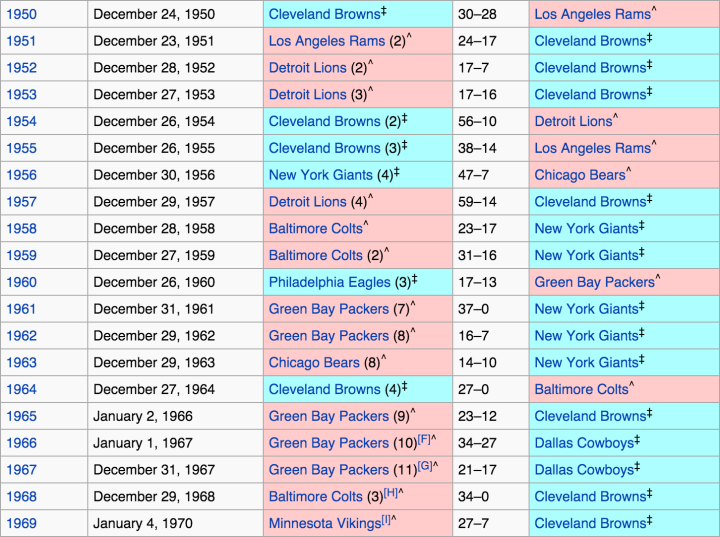 Of the ten championship games from 1950-59, Cleveland appeared in seven of them and won three. Detroit did almost as well, appearing in four title games and winning two. The Browns’ success continued into the next decade, where they made it to the championship game four more times, winning in 1964.