Last season, Oklahoma City Thunder point guard Russell Westbrook led the league in triple-doubles for the third straight year, tallying an NBA-record 42 of them. More incredibly, he became only the second player in history to average a triple-double with 31.6 points, 10.7 rebounds, and 10.4 assists per game on way to being named the league’s MVP.

CATCH ME IF YOU CAN

Westbrook went through a period of adjustment playing alongside a couple of other offensive stars in new teammates Paul George and Carmelo Anthony, and as a result did’t get off to the same red-hot start as last year. Still, Westbrook managed to post the most triple-doubles as any other player in the league — even after losing credit for one after the NBA took away a rebound, in what had been a 22 point, 10 rebound and 10 assist game versus the San Antonio Spurs.

Incredibly, with with a furious finish to the regular season, Westbrook managed to become the first player to average a triple-double in consecutive years. 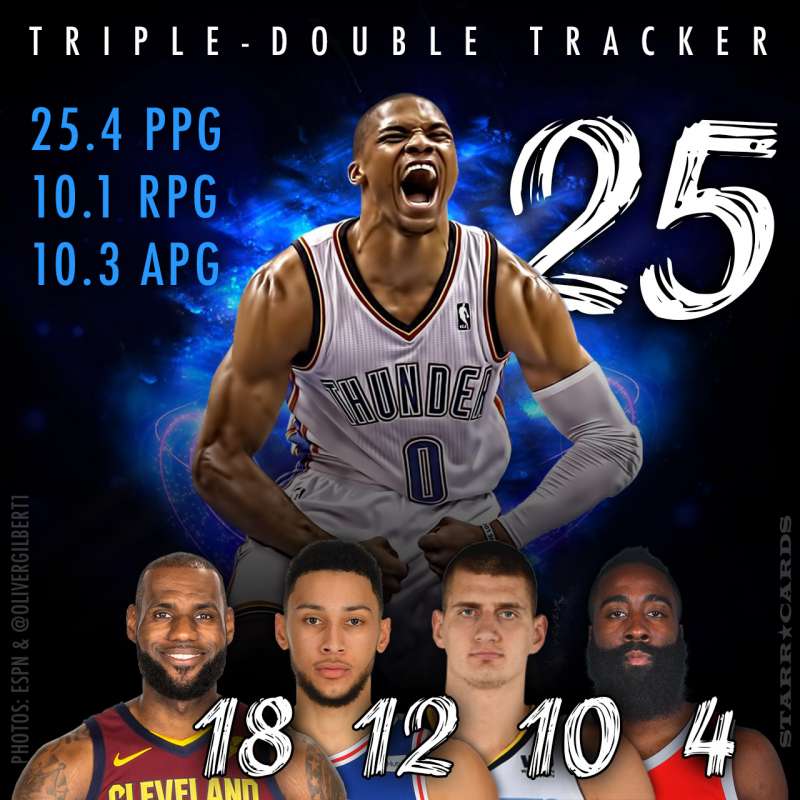 Westbrook’s latest triple-double came in April 9 road win over the Miami Heat, with 23 points, 18 rebounds, and 13 assists. The Thunder’s dynamic leader led the league in assists per game, and finished number seven in scoring.

James latest triple double came on April 6 in a road loss to the Philadelphia 76ers when he registered 44 points, 11 rebounds and 11 assists. The three-time NBA MVP finished second in the league in assists per game, third in scoring, and fourteenth in rebounds.

Last season, Westbrook passed Fat Lever, James, Larry Bird and Wilt Chamberlain in career triple-doubles to move into fourth place all time. Next in his sights is Jason Kidd’s tally of 107. Meanwhile, James has passed Bird’s career and now sits at No. 6 all time.