Of the various ways to tour a city none is more intimate than walking, but cycling comes in a close second. And of the various types of bikes, none are as capable of exploring the cityscape’s contours like a BMX — just ask Billy Perry.

Perry is a twenty-something professional BMX rider from New York City who documents his cycling adventures from a first-person perspective with a helmet-mounted GoPro or Sioeye Iris4G camera. 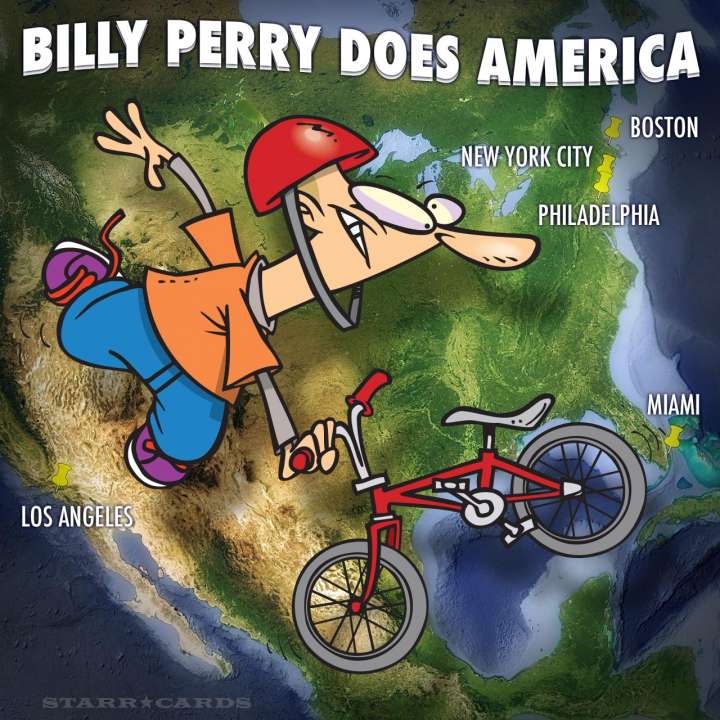 While Perry’s most-viewed video to date is one of him and his friends bombing an off-season water park on their BMX bikes, it is his wheeled explorations of America’s great cities that are the bread and butter of his eponymous YouTube channel.

Perry’s hometown video series featuring himself and friends riding New York City’s famed streets has garnered tens of millions of YouTube views over the past year.

When he’s not threading his way through congested traffic, Perry uses traffic barriers, rails, stairs and sloped walls as props for his BMX tricks.

Countless films have used the concrete bed of the Los Angeles river as a action backdrop — including Grease, Repo Man, Point Blank and Terminator 2 and 3 — so it’s only natural Perry began his SoCal BMX adventure there.

After exploring downtown Los Angeles’ streets, Perry headed to Potato Chip Rock for a surreal snap at the peak of Mount Woodson.

Perry’s foray through Miami included a couple of stops for liquid refreshment to battle the relentless heat. The highlight of the trip was when he hopped his bike on and off of a flatbed truck that was waiting at an intersection.

Naturally, no trip to Miami is complete without a visit to the beach.

The Boston BMX Jam culminated with Perry and a phalanx of fellow riders watching on as one particularly ballsy daredevil attempted an insane roof drop in.

On BMX Day in the City of Brotherly Love, Perry and a pal showed their cycling bros some love by tossing out free merch and almost starting a riot in the process.

The blistering 100-degree day gave way to hail before a summer downpour had the Street Series BMXers taking shelter.