If Halloween parties are predictive of NBA success, then at the end of the season the Cleveland Cavaliers will once more be holding aloft the Larry O’Brien trophy. Believeland’s beloved hoopsters congregated at LeBron James’ pad for another all-out shindig to celebrate All Hallows’ Eve. 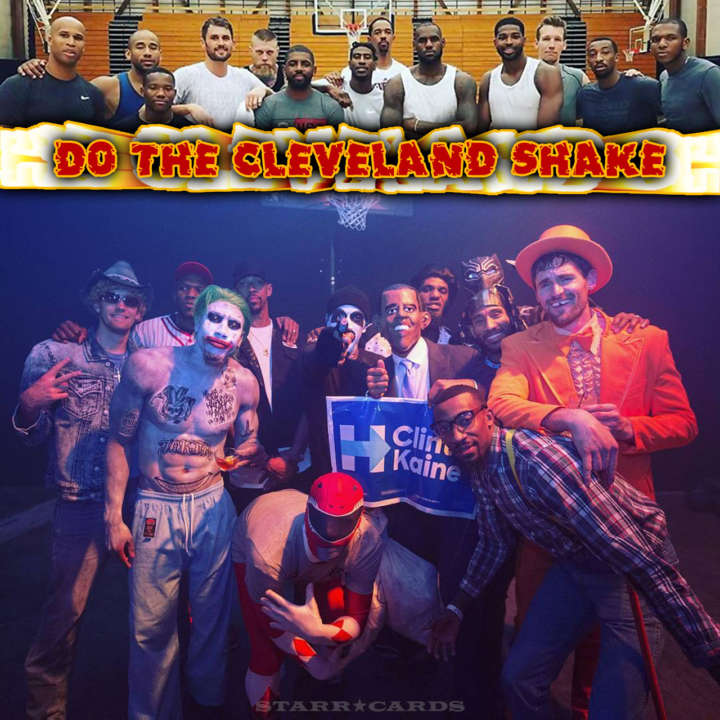 Rommie Rome has spotted a Playa hater in the atmosphere!!

James dressed as Jerome from Martin, reportedly dropping $5000 on the swaggy getup.

Headed to @kingjames Halloween party like the #Redranger lolol Inspiration from @jet_wavy had to bro, hope you don't mind lol.

Kyrie Irving, who dressed as a Jedi knight for last year’s get together, came as a funky-grooving version of Red Ranger from the Mighty Morphin Power Rangers series.

JR SMITH AS SOMETHING

J.R. Smith, who dressed as a baby last Halloween, admitted on Twitter to last minute planning for Bron’s bash this year around. At least he didn’t come as shirtless J.R…

Tristan Thompson dressed as Marvel’s Black Panther to Khloe Kardashian’s Storm and the couple spent a lot of time locking lips at the party.

Iman Shumbert (above center) both tamed and dyed his hair to tranform himself into Joker from the Batman franchise, while wife Teyana Taylor rocked out as Harley Quinn from DC Comics’ latest hit Suicide Squad.

Mike Dunleavy and his lady as Justin and Britney 😂#Cavs pic.twitter.com/5IMwTHjaQW

Halloween 2016 on the way to the big homie party @kingjames

Kay Felder, mixing historical periods, came as a pharaoh with a ninja on his arm.

Channing Frye came as “the only black guy” from Sons of Anarchy, the popular (and very white) TV drama about an outlaw motorcycle club in California’s Central Valley.