Those who would sell Kay Felder short, do so at their own peril. The five-foot-nine point guard was selected 54th overall in the 2016 NBA Draft by the Cleveland Cavaliers, who paid the Atlanta Falcons $2.4 million to acquire the pick.

While Felder’s height may seem like a serious impediment to an long-term NBA career, there are more than a few promising precedents. Five-foot-three Muggsy Bogues played in the league for 14 seasons, and five-foot-seven Spud Webb stuck around for a dozen years, which included an improbably win at the 1986 NBA Slam Dunk Contest.

With Matthew Dellavedova signing with the Milwaukee Bucks and Mo Williams recently announcing his retirement, the odds appear good that Felder will have plenty of opportunities to prove himself this coming season for the defending NBA champions.

''This is a different level now, and I have to get acclimated. The vets on the team — they've all been pulling my way and telling me things to help me out and to get me to that standard. I just have to be a sponge and learn.''

— Kay Felder, on playing for Cleveland

Despite donning Cleveland’s wine and gold uniform, Felder is all about Motown. Born and raised in the heart of Detroit, the lifelong Pistons fan attended Pershing High School where he was named Public School League MVP his senior year. Overlooked by major college programs, he opted to run the point for the Oakland Golden Grizzlies in nearby Auburn Hills, Michigan.

Felder obliterated the Horizon League’s career assists mark and set the Oakland record for consecutive made free throws at forty-six, even though he used only three of his four years of college eligibility. His junior year, Felder averaged an impressive 24.4 points and 7.8 assists per game.

Not settling here, we trying to be bigger and better next year!!! #AMG The give back!! Just want to say thanks to everything that helped out and to all the kids I hope I see y'all next year 🙏🏾🙏🏾💪🏾

While he’s yet to take the court in his first NBA regular season game, Felder is already giving back to his hometown. This summer he ran his first basketball camp at the Joe Dumars Fieldhouse in Detroit. 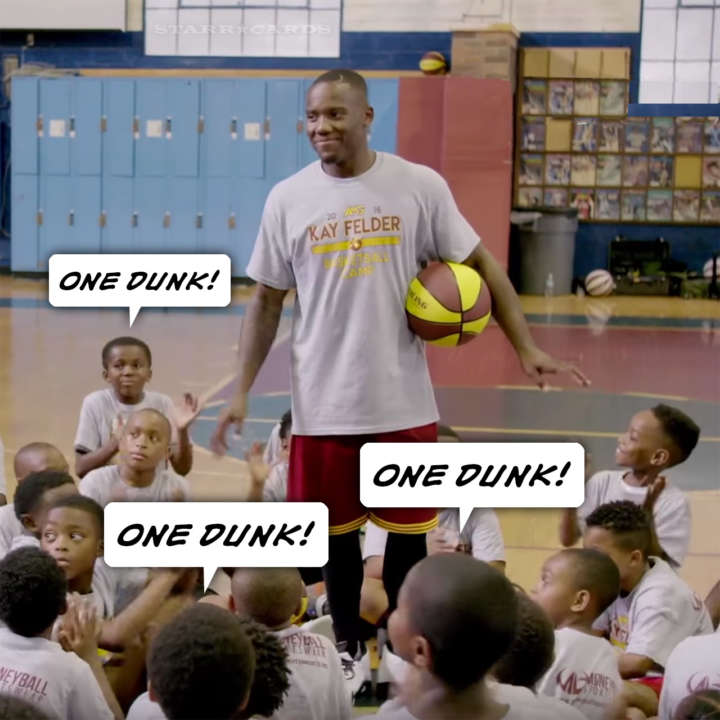 Naturally, at the camp’s conclusion, the attendees wanted to see their hero dunk the ball… and he obliged.