Conor McGregor is feeling right at home in the Big Apple. Decked out in plaid pants, a red turtleneck sweater and Gucci mink coat, the Irish fighter showed up fashionably late for the UFC 205 pre-fight press conference. He elicited the throaty support of a considerable contingent of his countrymen in attendance as he verbally taunted Eddie Alvarez, his Philly-born opponent for Saturday night’s headline fight. 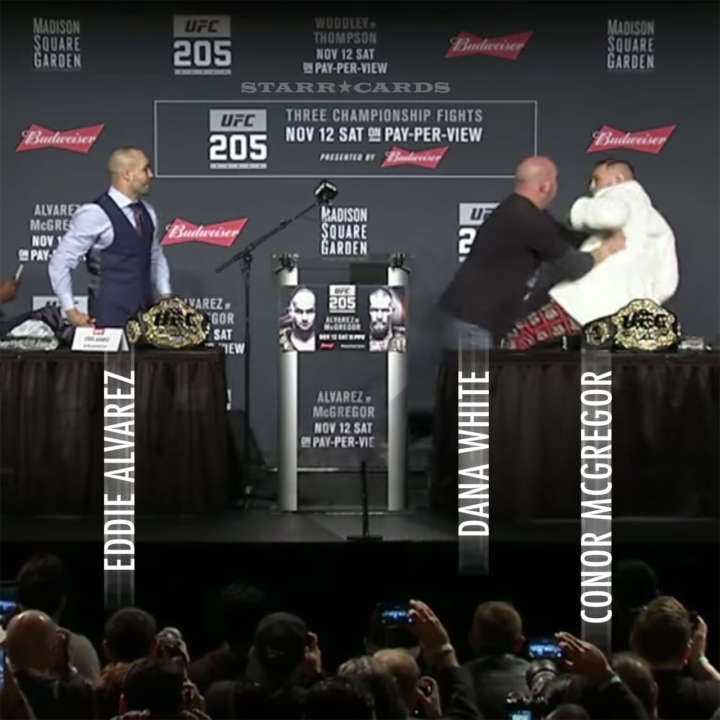 When Alvarez dropped a folding chair on McGregor’s half of the podium, Mystic Mac frenetically snatched it up and wielded it overhead before being restrained by UFC president Dana White.

As McGregor explained after the presser, he stood down after recalling his heavily-penalized bottle-throwing escapade with Nate Diaz in Las Vegas at UFC 202 pre-fight press conference.

The soon-to-be combatants were considerably more subdued for their early weigh ins today. Alvarez tipped the scales at 154.6 pounds, while McGregor came in just .2 pounds lighter. Both fighters are listed at 5-foot-9, but McGregor’s reach (74 inches) is 5 inches greater.

UFC 205 is the promotion’s first ever New York event and will be held in the mecca of combat sports, Madison Square Garden.