This Saturday night at American Airlines Center in Dallas, welterweight champion Tyron “The Chosen One” Woodley will make his first title defense in over a year when he faces Liverpool product Darren “The Gorilla” Till. In the lead-in to their fight, flyweight champion Nicco Montano was to face former UFC women’s bantamweight championship title challenger Valentina Shevchenko, until the former was hospitalized on Friday.

Woodley has successfully defended his welterweight belt three times since he became champion in the summer of 2016, but he hasn’t fought in over a year after tearing the labrum in his right shoulder during his win over Demian Maia at UFC 214. 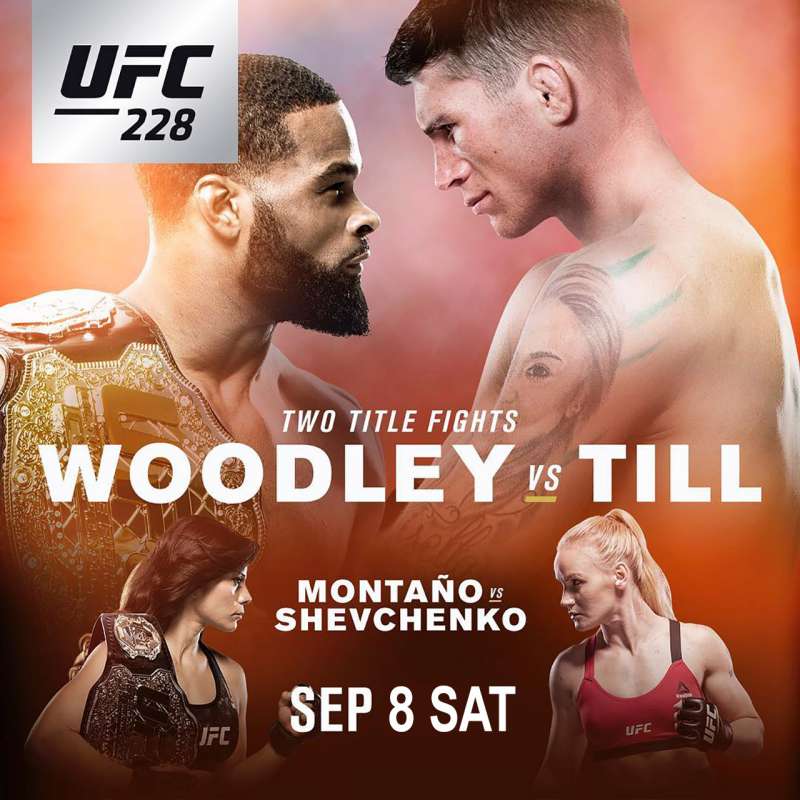 Till, on the other hand, is fresh off a unanimous UFC Fight Night decision over Stephen Thompson in May that moved his record to 17-0-1. Standing north of six feet tall, the southpaw will loom over the 5-foot-9 champion in the octagon.

Montano won the UFC’s inaugural women’s flyweight belt in December of last year with a unanimous five-round victory over Roxanne Modafferi. As the co-main event at UFC 228, she was to make her first title defense versus No. 1 ranked Sevchenko, but had her body shut down during her weight cut and had to withdraw.

On Episode 1 of UFC 228 Embedded, Shevchenko trains standup in Houston, then unwinds with a different kind of headhunting. Montano travels to Colorado to support her teammates, using the official ring for her own practice before the event starts.

In Las Vegas, Till finishes his training camp, confident he will make weight and overwhelm his opponent, while Woodley, at home in St. Louis, tests his endurance by getting his kids up for the day.

On Episode 2, title challenger Till puts his training partners through their paces, while defending champion Woodley combines cardio with family time.

Meanwhile, still in the Lone Star state, Shevchenko stays sharp in a Fort Worth gym, and Montano, now back home in Albuquerque, endures pre-fight physical therapy.

On Episode 3 of UFC 228 Embedded, Montano prepares to carry on a Navaho family tradition. Opponent Shevchenko makes the media rounds and sneaks in more gym time. Welterweight headliners Till and Woodley head to their respective airports for their trips to Dallas.

In other action, Strawweight Tatiana Suarez must make a return visit to the mall ahead of media day. DWTNCS standout Brandon Davis prepares for a short-notice, high-profile bout against featherweight Zabit Magomedsharipov, who checks in as planned despite the change in opponent.

On Episode 4, Woodley embraces a fight with another feared striker – this time, undefeated Till. Featherweight Davis zones out with video games, while former strawweight champion Carla Esparza unplugs for fight week.

Strawweight Karolina Kowalkiewicz shows off her dogs’ new Halloween costumes and plans to show off her ground game on Saturday against Jessica Andrade. Montano and challenger Shevchenko join Woodley and Till at open workouts. And strawweight Tatiana Suarez pushes through her last tough training session before fight night.

On Episode 5, opponents square off at media day, including Woodley vs. Till and Esparza vs. Suarez. Magomedsharipov jogs away his final pounds, while opponent Davis loses his in a pickup basketball game with bantamweight John Dodson.

Meanwhile, Kowalkiewicz trains through her weight cut and opponent Andrade spends hers in the pool. Bantamweight Aljamain Sterling checks his numbers at the hotel, as Suarez passes time bowling.