Daft Punk released “Harder, Better, Faster, Stronger” in 2001, more than a decade before Jessie Graff would ever set foot on an American Ninja Warrior obstacle course.

When the French duo of electronic music fame originally penned the lyrics to the iconic piece, they couldn’t have possibly known it would serve as the perfect ode to Graff’s stunning performance at ANW’s Season 8 premiere.

The LA Qualifiers course, constructed on an MGM Studios backlot, was designed to up the difficulty level after two competitors successfully conquered Mt. Midoriyama last season, but Graff — with her mother/training partner watching on — navigated the new obstacles like a walk run through the park. 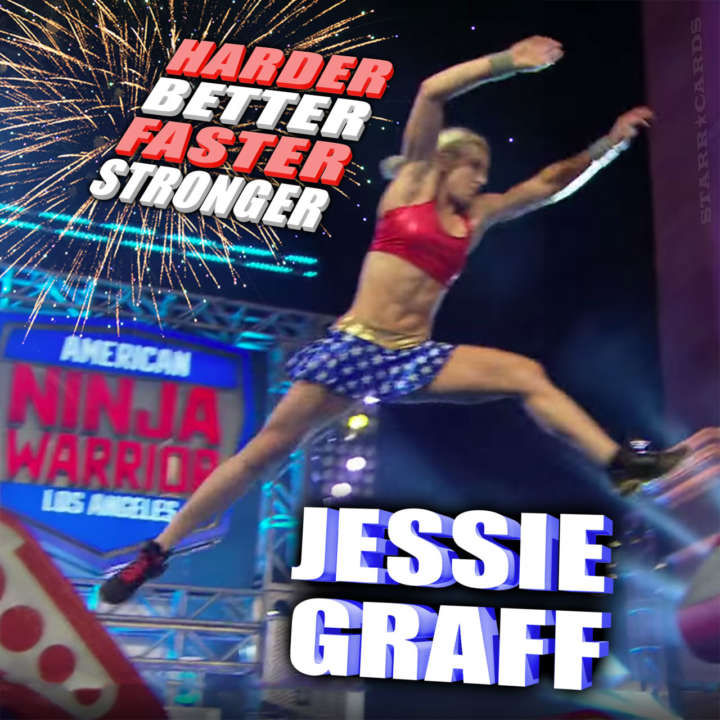 Graff scaled the vertically-enhanced Warped Wall and punched the buzzer with the night’s 7th fastest time. After the crowd-pleasing performance, Graff enjoyed the premiere-watching party with a pet pig cradled blissfully on her lap.

Graff was a record-setting pole vaulter at the University of Nebraska before moving to Los Angeles, where she became a professional stuntwoman and occasional ukulele strummer.

A Warrior isn’t born at the buzzer, but at the moment you choose determination. #AmericanNinjaWarrior

Since sporting in a chicken costume for her rookie run on ANW, Graff has graduated to a more apropos Wonder Woman ensemble. The five-foot-eight, 32-year-old has been getting harder, better, faster and stronger with each performance, which bodes well for a return trip to the Vegas Finals later this summer.