For people suffering from severe acrophobia, sleeping in a second-story hotel room can be a source of anxiety. On the other end of the spectrum, climbers like Sasha DiGiulian can slumber soundly on a small platform at 1,200 feet.

WELCOME TO THE HOTEL MORA MORA

During her ascent of Madagascar’s Mora Mora, DiGiulian recorded a first-person account on what it’s like to spend the night tethered by a single rope to a sheer cliff. Climbing partner Edu Marin descended a few feet, thankfully, before demonstrating the makeshift hotel’s gravitationally-powered bathroom facilities. 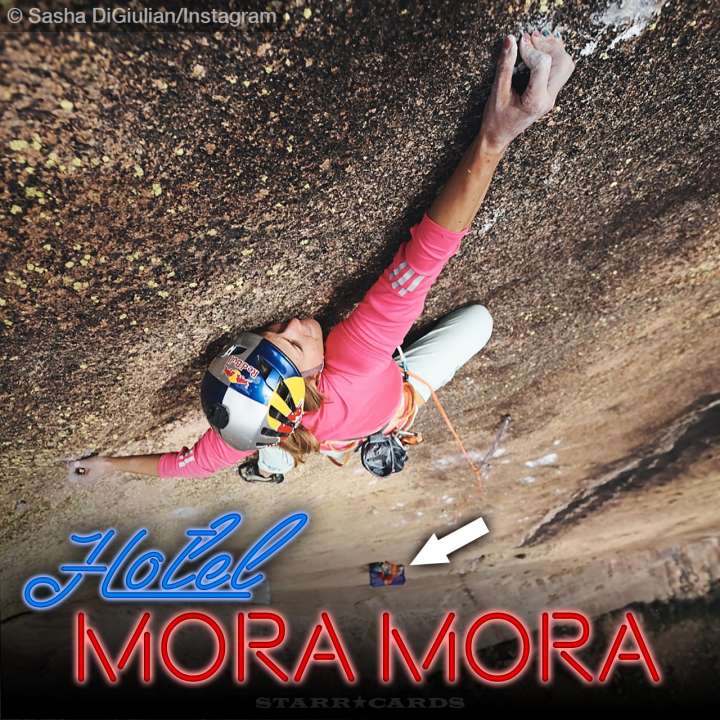 ''I had no idea whether or not I could do the climb. This is the only way to progress in all aspects of life — to put yourself on the line and go for what may be uncertain, but that excites you and motivates you.''

The night spent on the imposing granite face, was one of two bivouacs that DiGuilian and Marin made during the three-day climb of the 2,297-foot-tall wall.

Located in the heart of the world’s fourth largest island, the multi-pitch rated 5.15b (8c) Mora Mora is one of the hardest big wall climbs anywhere. In 2010, Adam Ondra did the first ascent of the route.

Given the nature of the dense, yet abrasive granite rock, the amount of handholds to choose from is sparse. The ones DiGuilian and Marin had to select from were made up of small crystalize granite edges the size of “shelled peanuts.”

When DiGiulian summited the massive rock, she became the first female to free-climb Mora Mora, and just the second person overall. Later that day, Marin became the third.