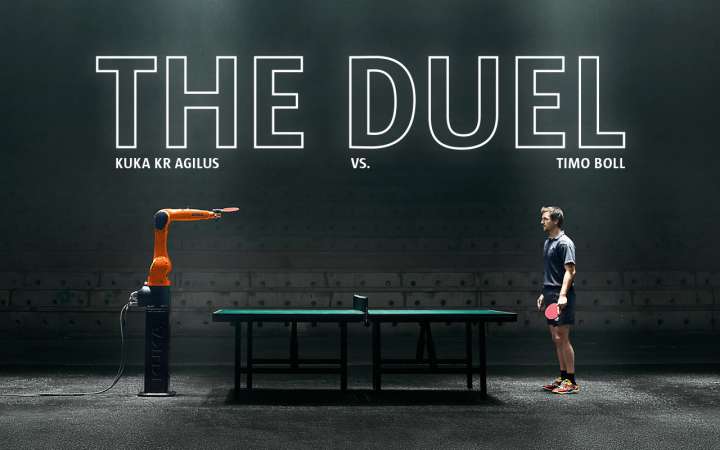 No sport highlights the ultimate demise of humans in their currently friendly rivalry with robots like table tennis. In 2014, former world No. 1 German player Timo Boll needed to pull out all the stops to squeak by the KUKA KR AGILUS Robot.

Not one to take a loss lightly, KUKA version 2.0 promised to exact revenge…

For the months leading up to the rematch, the KUKA vs. Boll battle was hyped like a prizefight.

It turns out that the curious pose struck by Boll in the promo poster was to foreshadow the competition to come. The KUKA KR AGILUS exchanged its table tennis paddle for an array of wine glasses filled with water to challenge Boll to a glass harp battle.

YOUR OWN ROBOT VS HUMAN DUEL

If you have seven-and-one-half Benjamins burning a hole in your pocket, you can face off against a ping pong robot of your very own. The Robo-Pong 2050 costs $749 and is able to spit out balls with topspin, backspin, and sidespin and execute push, chop, counter, lob and fast loop shots.