Back from her history-making Olympic medal haul, gymnast Simone Biles sat down with Ellen DeGeneres to discuss the experience of finally getting to meet her celebrity crush Zac Efron.

When Biles appeared on The Ellen Show in March, the host gifted her a Efron-themed leotard. But the real surprise for Biles came before her final event at the Olympic Games last month — Efron flew down to Rio where he exchanged cheek kisses with the smitten Texan at the NBC studio.

Prior to Biles, Ellen interviewed Channing Tatum who was promoting Magic Mike Live, the new Vegas show he co-directed which will debut at the Hard Rock Hotel & Casino next March. When informed he would get the chance to meet Biles, Tatum insisted that he would geek out more than the petite girly-girl gymnast. 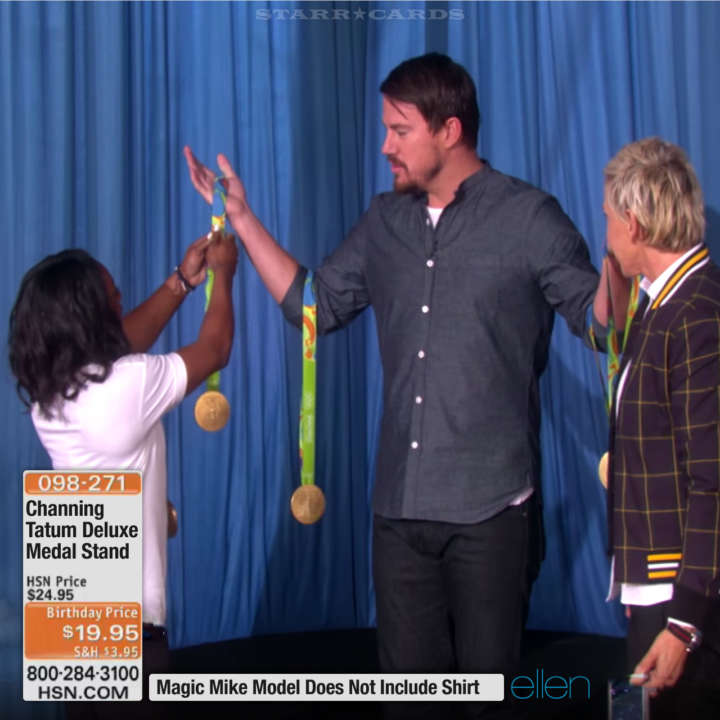 Ellen had Tatum hide behind the curtain adorned with Biles’ Olympic medals and the two stars managed not to freak out when introduced.

Aside from Efron and Tatum, Biles has been on a celebrity-meeting tear since her star turn in Rio.

Olympic medalist.. at least for a day!

Biles, along with her Final Five teammates, got to meet Usher…

…and relax with Jimmy Fallon before their Tonight Show appearance.

selfie with Kim ✔️😍 just as beautiful in person

so good seeing this sweet handsome guy last night ☺️ good luck on the rest of your tour! @jakemiller

…and snuggled with rapper Jake Miller, who is currently touring with Fifth Harmony.

just like Jon said "up to no good". haha | legendary Jon Chu 😎

The following day, Biles was spotted chilling with Jon M. Chu, the director of a pair of Step Up movies, and the video for Justin Bieber’s “Never Say Never.” Does this mean Biles will be appearing in the next Step Up sequel or Bieber music video? Never say never…