After a more than a year spent in convalescence, hapless Scott Sterling returned for another parody video produced by Brigham Young University’s Studio C. Everyone’s favorite Yalie may wish he had stayed on the sidelines — or away from balls altogether — after his sporting heroics again reduced his face to a fleshy pulp.

This is a MILESTONE for Studio C! This is our FIRST video to reach 1 MILLION views in under 24 hours! We want to thank all of you who support us and watch and share our videos! We sure love you guys! Watch ALL Scott Sterling videos and updates here: https://goo.gl/b0Qcfb #StudioC #ScottSterling

Whether he’s on the soccer pitch tending goal, or playing defense for the Bulldogs volleyball team in the NCAA Championship, Sterling’s head attracts the ball with uncanny frequency. 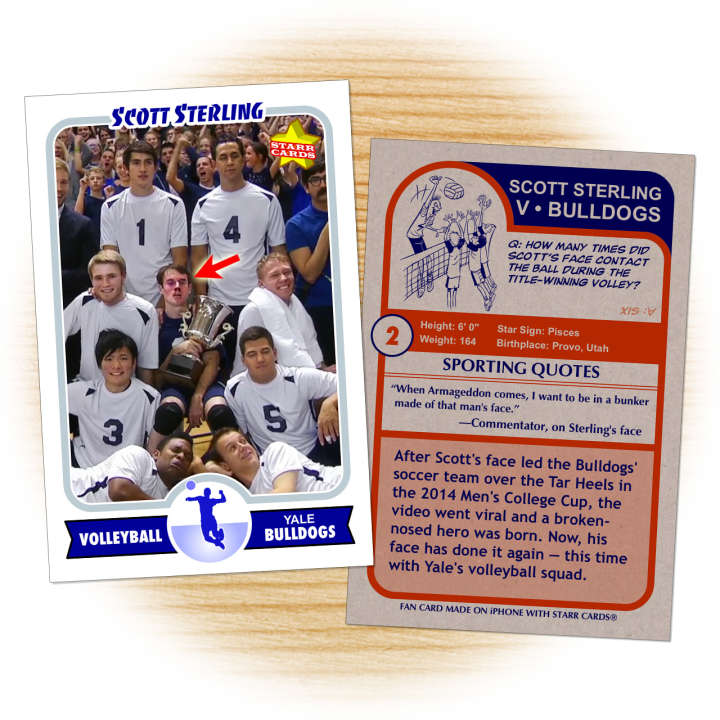 Sterling’s facial fortitude made Studio C’s volleyball video a hit; it has accumulated more than 25 million views on YouTube since it was first released a little over a year ago. He even inspired an enterprising fan on Imgur to create a fan card complete with bio data.

Sterling should have retired from sport after his face famously led Yale over North Carolina during soccer penalty kicks, but kids (well, at least boys) crave cartoonish violence and won’t be denied.