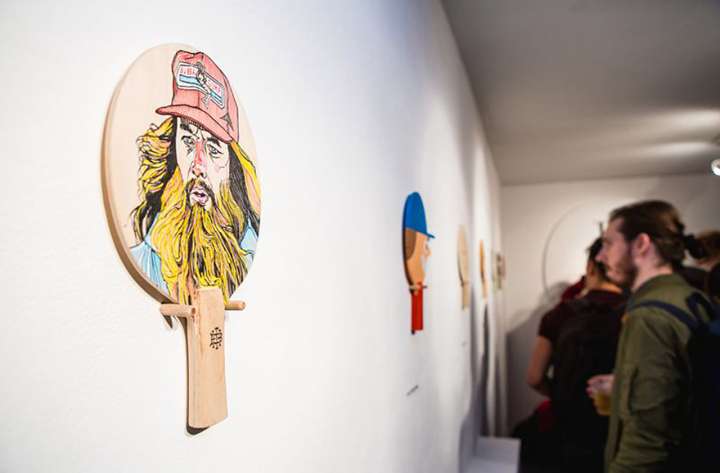 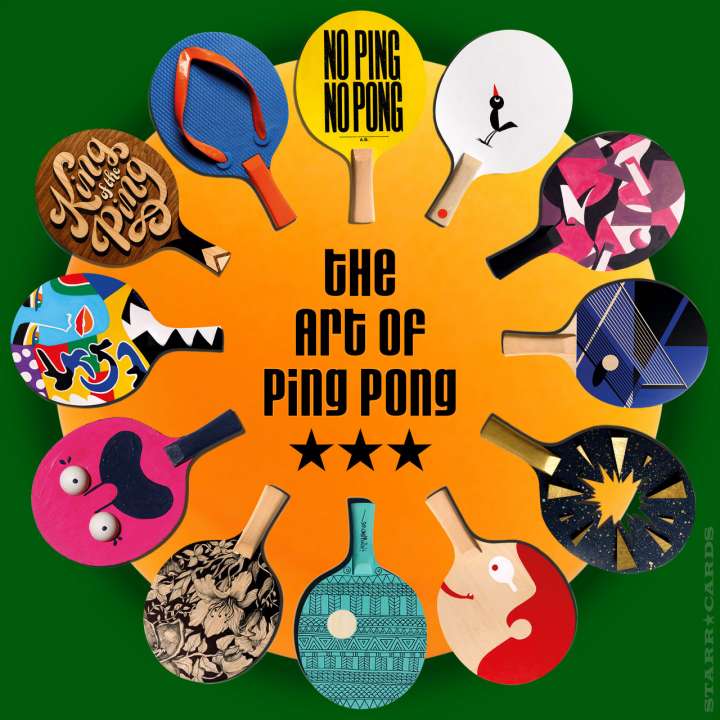 For the past four years, The Art of Ping Pong project has been raising money for charity by auctioning off artistically-enhanced table tennis paddles (or, bats, as they are called in British parlance).

Money raised from the event’s first couple years went to support BBC Children in Need, while the most recent auction benefitted The Alzheimer’s Society, the UK’s leading dementia support and research charity.

The highest winning bid among this year’s crop of ping pong paddles was for £1001 (US $1,233). A sampling of the paddles past and present is offered below…

Phil Robson is a British artist, designer and director whose art is bold and graphic. Repurposing form and painting with contemporary textures, Robson’s work is heavily influenced by a 90s childhood, hip hop, and his addiction to sneakers and sportswear.

One of the more unorthodox paddles from this year’s auction was Matt Blease’s creation which was outfitted with skateboard trucks, wheels and grip tape.

An inscription on the underside of the paddle leaves no doubt where Blease’s affections lie.

Check out Jacob Everett’s brilliant portrait of Ma Long, the current world number one in men’s singles. The detail of his portraits using a dot technique is incredible.

Nylon Sky is an independent jewelry and accessories brand from the UK, currently based in Barcelona. Their paddle was made with a monochrome design featuring maple wood and inlaid Perspex.

For The Art of Ping Pong 2014, artist Rebecca Sutherland reimagined her paddle as a tree bearing table-tennis ball fruit.

Frenchman Thierry Noir may have been the first street artist to paint the Berlin Wall. His goal was to transform it, to make it ridiculous, and to help destroy it. His work preempted the wall’s ultimate fall in 1989. Hopefully, his paddle won’t portend the same fate for ping pong…

Bidders scrambled to secure illustrator Daniel Frost’s paddle in the hope it would egg on the competition.

Whichever bidder secured Morag Myerscough’s artwork is sure to have the most colorful paddle at any table tennis tournament, and leave opponents with no doubt as to his intention (SMASH!).

Jon Burgerman is a UK-born, NYC-based artist instigating improvisation and play through drawing and spectacle. He is a purveyor of doodles and is often credited and referenced as the leading figure in the popular’Doodle’ art style. His pink bug-eyed paddle creation captures unbridled gleefulness.