In the 2018 Tour Championship, Tiger Woods claimed a wire-to-wire victory with rounds of 65-68-65-71 to finish 11-under-par and two strokes clear of the field en route to his first PGA Tour win in five years and 80th in his career. The following year he claimed his 15th major championship with his fifth title at the Masters.

In 2019, Woods tied Same Snead’s record for most Tour wins when he claimed the Zozo Championship in Japan by three strokes over Hideki Matsuyama. We took his return to the top of the leaderboard to look at the biggest career winners on the Tour…

Until Woods burst onto the scene, Snead’s 82 PGA Tour career victories, and Jack Nicklaus’ 18 wins in major championships were thought to be untouchable records. The California Kid’s meteoric trajectory soon had golf prognosticators projecting he would smash though not just one, but both of the lofty marks. 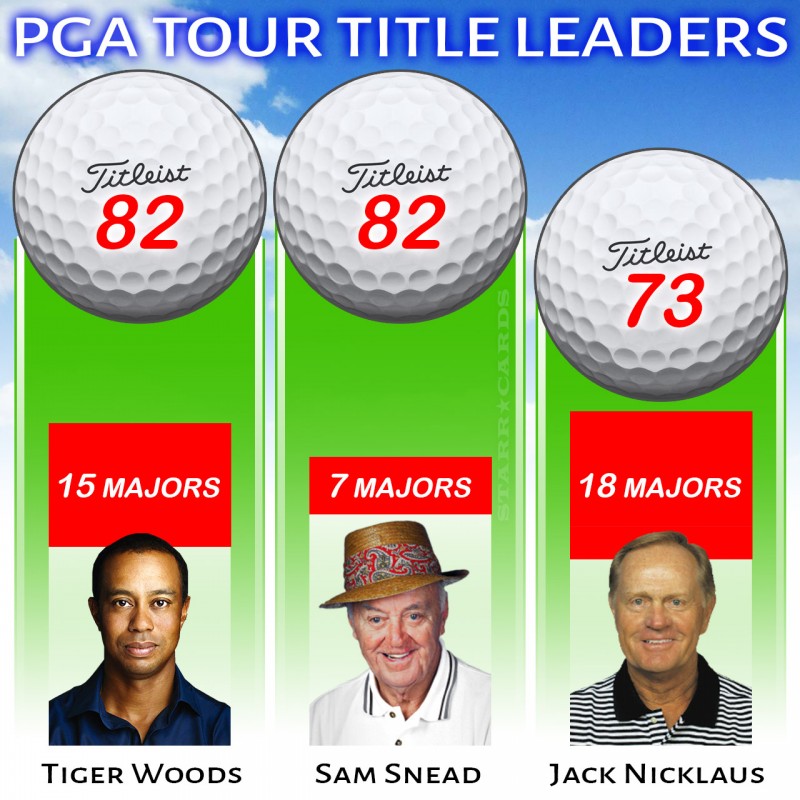 Woods tumultuous 2010 divorce and a series of subsequent back surgeries seemed to denote the final chapters of his sporting career, until his 2019 triumph at Augusta changed the script. Now, sports writers are anticipating anew that he may yet challenge Nicklaus’ tally of majors.

Snead’s sweet swing and towering drives earned him the nickname “The Slammer”, but it was his penchant for winning that framed his record-setting Hall-of-Fame career. No player has won more events in a single season since he took 11 titles in 1950, but it’s his record 82 PGA Tour titles over a span of 27 years that is his enduring legacy.

Among the plethora of accomplishments in Woods’ already-legendary career are four rounds in which he shot 61, three PGA Tour finishes at 23-under-par or better, two runs at No. 1 in excess of 263 weeks, and a string of seven consecutive victories from 2006-07 (including the British Open and PGA Championship).

Nicklaus not only holds the record for most majors (The Masters, 6; US Open, 4; British Open, 3; PGA Championship, 5), but also placed second a staggering 19 times — more than any other golfer in history.

Other than Woods, the only other active player in the top ten of most PGA tour wins is Phil Mickelson who, with 44 — slightly more than half Tiger’s total. The next highest total among golfers still competing is Dustin Johnson who is in 34th place with 20.