UFC 209 Tale of the Tape: Tyron Woodley vs Stephen Thompson 2

UFC 209 Tale of the Tape: Tyron Woodley vs Stephen Thompson 2

One of the most exciting title rematches in welterweight history goes down at UFC 209 when current champ Tyron Woodley takes on Stephen “Wonderboy” Thompson this Saturday at 10pm ET only on PPV. 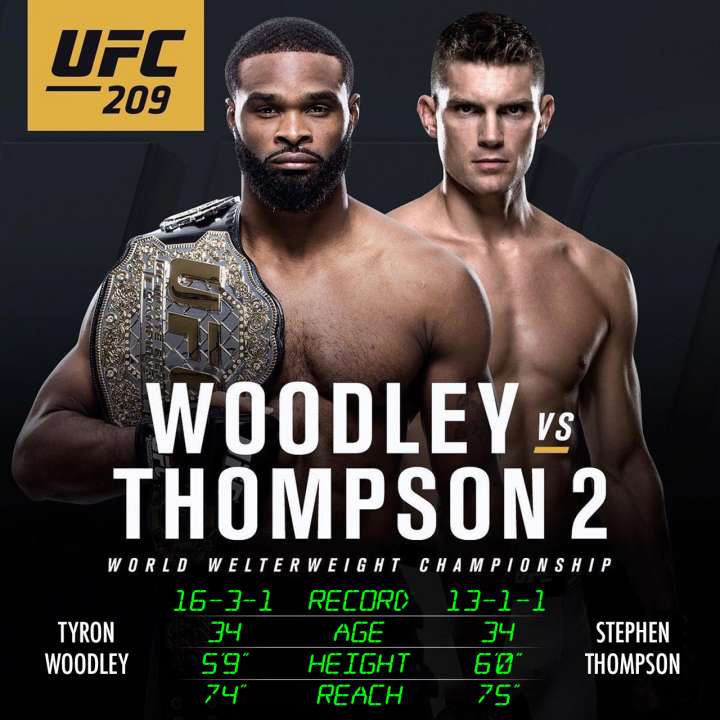 Five-foot-nine Woodley has a 74-inch reach and has racked up 16 victories against 3 losses and one draw (which came against Thompson at UFC 205). Thompson is three inches taller than Woodley and has an extra inch of reach. Wonderboy’s record stands at 13-1-1.

Does either fighter have an edge heading into their rematch? Let’s find out…

Inside the Octagon returned with John Gooden and Dan Hardy breaking down the UFC 209 main event rematch between Woodley and Thompson.

Fight analyst Robin Black shared three keys to victory for Woodley heading into UFC 209; 1) drill his lethal right hand, 2) double down on the double-leg takedowns, and 3) beat the big movements with small movements.

Thompson hopes to produce lots more shots like the one above in the rematch.

AND THE WINNER IS…

So who will prevail after Woodley and Thompson play it back? Michael Bisping and Dominick Cruz both favor the champ to keep his belt despite Vegas favoring Wonderboy. Vegas bookmakers, on the other hand, have Thompson a -150 to -180 favorite over Woodley.