Thirty elite athletes took on the American Ninja Warrior Philadelphia Finals course on Monday night, and all thirty ultimately succumbed to gravity. Even ninja stalwarts Joe Morovsky, who was previously three-for-three on City Finals courses, and Geoff Britten, who had a perfect run through last season’s obstacles, weren’t able to reach the buzzer in Philly.

Of all the competitors, hometown hero Chris Wilczewski made it the farthest, ascending the final Invisible Ladder obstacle to within feet of the finishing platform before his grip gave way, but as impressive as his run was, it was rookie Jesse “Flex” Labreck that stole the show.

Ever since Kacy Catanzaro became the first woman to complete both an ANW Qualifier and City Finals course, the obstacle-racing show’s biggest stars have been its females.

With her run last night, Labreck appears to be posed to join Catanzaro, Jessie Graff, Meagan Martin and Michelle Warnky as one of the sport’s premiere draws.

Jesse is the first woman to make it past Rolling Thunder! #AmericanNinjaWarrior pic.twitter.com/COqzVYDCun

Before gassing out on the penultimate obstacle, Labreck became the first woman to conquer Rolling Thunder — the same obstacle that had been her comeuppance in the Philadelphia City Qualifier.

''I had attempted Rolling Thunder in qualifiers and I felt like I wasn't strong enough to do it yet. I thought about every time I hadn't done pull-ups after my workout and I was kicking myself for that.''

Labreck was a standout track and field athlete at the University of Maine where she set 11 school records which still stand. The 26-year-old now resides and trains in Newton, Massachusetts, where she serves as a caretaker for Emeline Sterpe, who has cerebral palsy.

We've been to multiple viewing parties this week and received so many supportive and sweet messages (obviously Em is hating all the attention 😉 ) we are trying to reply back to all the messages and comments but if we missed anyone we really just wanted to say thank you!! The support has been overwhelming and amazing ❤️ Em is really happy with how the back story video came out! We are back to normal lives and she still loves to call me a weirdo soo… Not much has really changed at home 😊 thank you again for all the love 💕 #americanninjawarrior #flex #flexlabreck #anw8 #cerebralpalsy #awareness

Emeline made the trip to Philadelphia for both of Labreck’s runs, but will have to watch the 26-year-old’s next run at the Las Vegas Finals on television. That didn’t stop the radiant young woman from smiling throughout Labreck’s inspiring run at the City Finals. 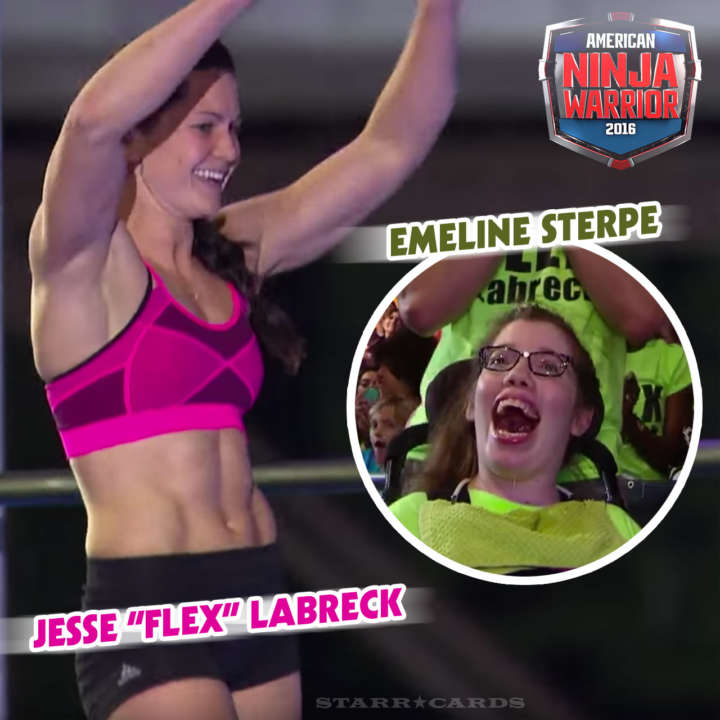