Previously, we used triangulation to expose the Illuminati’s involvement in the three-way intrigue between LeBron James, Rihanna and Drake. Now rapper French Montana has worked his way into the mix, making for a quirky quadrangular relationship. 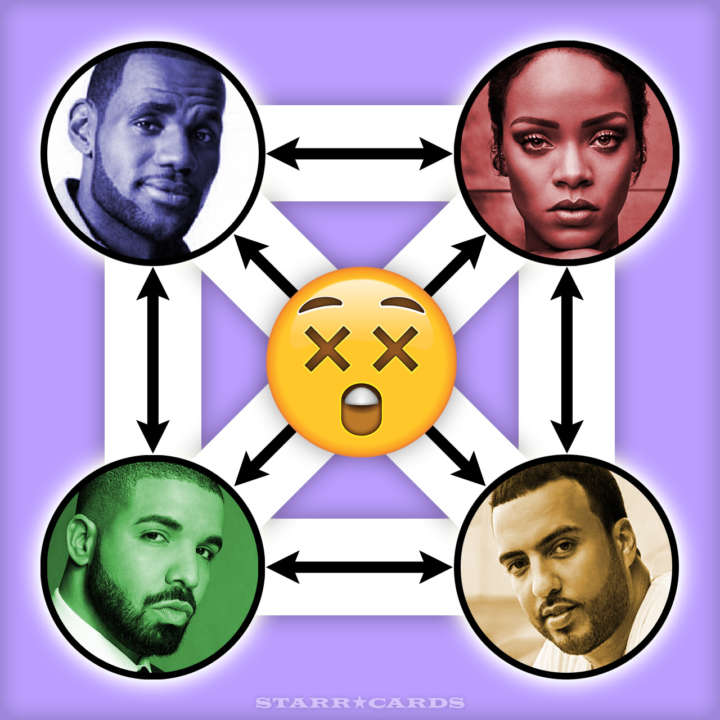 The foursome’s follies involve love, money and loyalty — all the necessary ingredients for a hit Broadway musical. “Coincidentally” Lin-Manuel Miranda of Hamilton fame will be free to pursue his next creative project soon…

Rihanna has not shied away from her love of the very-married James. After Game 7 of the NBA Finals, she posted a pic of herself adoringly toasting the Cavaliers star with the caption “Bae. LOL!” followed by five emoji, the meaning of which we will leave to more experienced cryptographers:

More recently, Rihanna added a surprise element to our muddled storyline, by posting a pic with Conor McGregor aka “The Notorious MMA.” Jealous yet, LeBron?

Meanwhile, Rihanna’s ex-squeeze Drake could not share in the Barbadian beauty’s delight at the Cavs victory. Drake bet against LeBron James’ team to the tune of $60K and came up short against fellow rapper French Montana. Note to Drake: Don’t monkey around with the Moroccan music maker.

French Montana has links of his own to Rihanna. He dropped her name in the lyrics for “Shot Caller” (hair like Rihanna), and was featured on the remix of Riri’s “Pour it Up.”

As for James, he has refrained from responding to Rihanna’s affections — at least publicly. To the chagrin of Miami Heat and Los Angeles Laker fans, the four-time NBA MVP declared his fidelity to Cleveland and the Cavaliers.

U guys are incredible!! #TheLand #ChampionshipParade

During his victory rally speech, James recognized each of his teammates in turn to articulate their individual contributions to the title run. Rihanna, unfortunately, was not given a shout out…