The NHL’s future looks bright for years to come with a trio young stars having made a significant impact this season. Edmonton Oilers centre McDavid, who turned 20 in January, led the league in scoring with 100 points to win the Art Ross Trophy in just his second year. 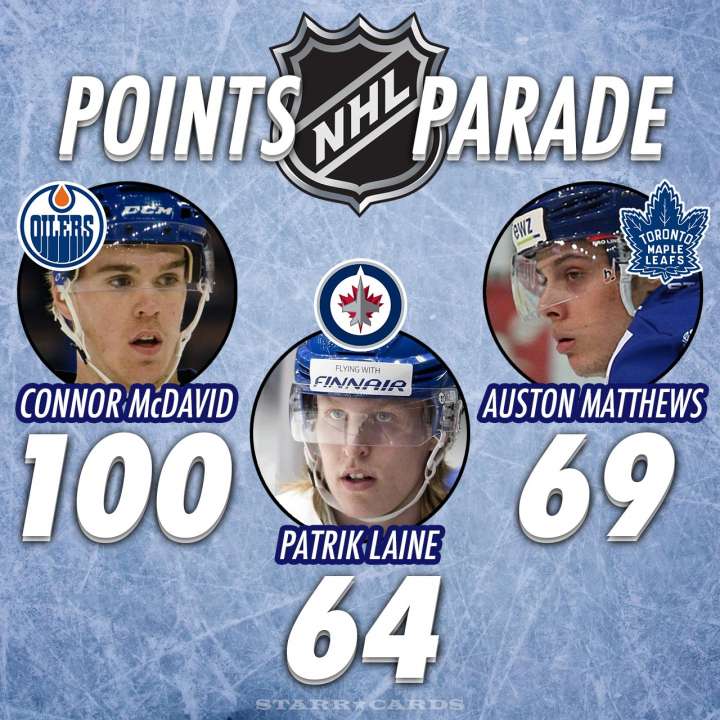 Meanwhile, 18-year-old Patrik Laine of the Winnipeg Jets, and 19-year-old Auston Matthews of the Toronto Maple Leafs — both rookies — lead their respective teams in goals.

Here are the final tallies for the talented trio…

McDavid finished the season with two assists in a win over the Vancouver Canucks to bring his point total this season to 100. The 47-26-9 Oilers finished in 2nd place in the Pacific Division, just two points back of the Anaheim Ducks, and will face the San Jose Sharks in the Western Conference first round playoff.

Laine failed to score in his last two starts of the season, but still finished his rookie campaign with 64 points. Earlier in the season, the fleet-footed Finn became the youngest player ever to record his third hat trick.

The 40-35-7 Jets failed to make the playoffs, but with Laine’s continued development could seriously contend for a postseason slot next year.

Matthews finished the year with 69 points after he was unable to find the back of the net in his final regular season game. His 40 goals make him the top scoring American-born rookie in NHL history. The 40-27-15 Maple Leafs finished in 3rd place in the Atlantic Division, and will face the Washington Capitals in the first round of the Eastern Conference playoffs.