If you’re searching for affirmation that America is still a cultural melting pot, you needn’t look further than Minnesota’s newest craze: Zamboni® Karaoke. In a state whose name is taken from the Dakota Sioux word for “sky-tinted water”, athletes of a sport which originated in Nova Scotia ride in an ice resurfacer invented by the son of Italian immigrants and partake a sing-a-long format popularized in Japan. 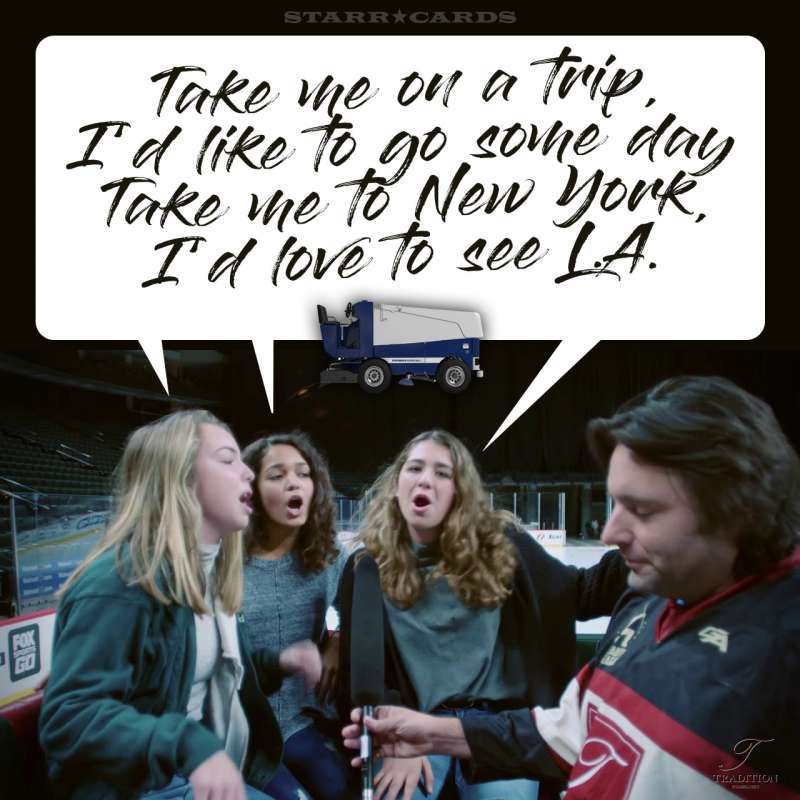 Zamboni® Karaoke is the brainchild of John King — the creative genius behind the annual Minnesota State High School All Hockey Hair Team — who claims the new format is what would happen if Carpool Karaoke had a fender-bender with the hockey scene in the movie Strange Brew.

In the second episode of Zamboni Karoke, we hover above the ice with Minnetonka Skippers hockey players Matt Koethe, Luke Loheit, and Andrew Hicks. The trio provides us serviceable snippets from Chris Brown’s “Forever” and Miley Cyrus’ “The Climb”.

Next, Kings hosts three players from chilly shores of Lake Superior in the form of Ian Mageau, Ryder Donovan, and Garret Worth. The Duluth East Greyhounds stars flex their vocal muscles on One Direction’s “What Makes You Beautiful” and Iyaz’s “Replay”.

In the first episode of Zamboni Karoke to feature a girls’ hockey team, King sits down with 2016 State Champs Eva Hendrikson, Aliyah Lance, and Emily Oden from the Edina Hornets. The girls outshine all the show’s previous guests with full-throated renditions of Shawn Mendes’ “Stiches” and Kidz Bop Kids “American Boy”.

The latest episode represents a chance to meet another triumvirate of Minnesota’s top high school hockey players in the state like Mack Motzko, Nate Warner, and Jeron Hirschfeld from St. Cloud Cathedral. The boys start off with Cyrus’ “Party in the USA”, before cranking out Florida Georgia Line’s hit song “Cruise”.