Last season, NHL newbie Mathew Barzal set the ice on fire on way while scoring 85 points. This year’s rookie crop has produced another scoring machine that has been making his presence felt over the course of the 2018-19 season. 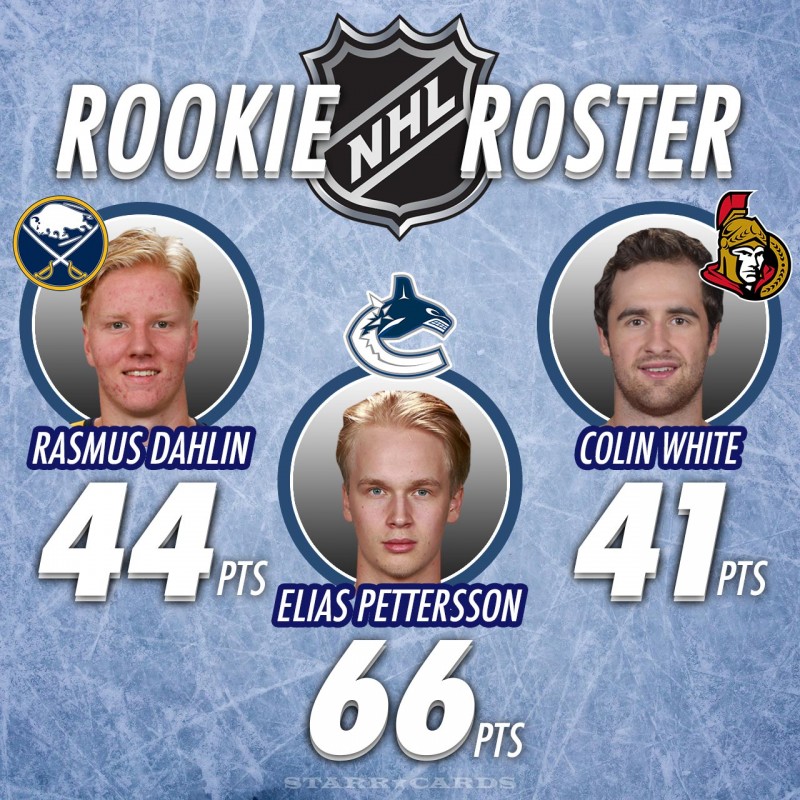 20-year-old Elias Pettersson of the Vancouver Canucks finished the season far and away the scoring leader among rookies. Meanwhile, 21-year-old Colin White of the Ottawa Senators and 18-year-old Rasmus Dahlin of the Buffalo Sabres struggled to stay in the conversation for the Calder Memorial Trophy. Strong finishes to the regular season by left wingers Andreas Johnsson of the Maple Leafs and Brady Tkachuk of the Ottawa Senators have entered their names into the mix for the top-rookie honor as well.

Here are the regular season tallies for the talented rookies…

Pettersson got off to a fast start that saw him named the October Rookie of the Month, but tapered off slightly in the second half of the year. The Swede led all rookies in both goals and assists by fairly significant margins, despite missing five games due to a sprained knee.

Massachusetts product White, the No. 21 pick in the 2015 NHL Entry Draft, played hockey in college for in-state powerhouse Boston College before being signed by the Senators.

Dahlin, the No. 1 overall pick in 2018 NHL Draft, edged fellow-Swede Pettersson for the Rookie of the Month designation in November after scoring one goal and dishing out 9 assists in 15 games.