Countless Ottawa fans felt the sting of their beloved Senators dropping a third straight game in their playoff series with the Montreal Canadiens, but none can comprehend the pain felt by Jonathan Pitre.

Pitre is an avid Senators fan who suffers from epidermolysis bullosa (EB), one of the most excruciating conditions known to medicine. But his courage and determination to live (and thrive) is unlike anything encountered in the realm of sports.

''I may not have the physical ability to become a professional athlete, but I’ve got a voice — and it's powerful! With my voice, I can be a scout, a coach, a sportscaster. My options are limitless.''

Currently, aside from rooting for the Sens, Jonathan is using his voice to support others with his affliction and raise awareness about the disease in the hope for an eventual cure. His efforts have already raised more than $100,000 for the EB charity, DEBRA Canada.

SENATORS SCOUT FOR A DAY

Early in the 2014/15 NHL season, the Senators signed Jonathan to a one-day contract as a pro scout for the team. Another life-long Senators fan — using the alias Advance_Ottawa on Imgur — made a hockey card in recognition of Jonathan’s inspirational perseverance. 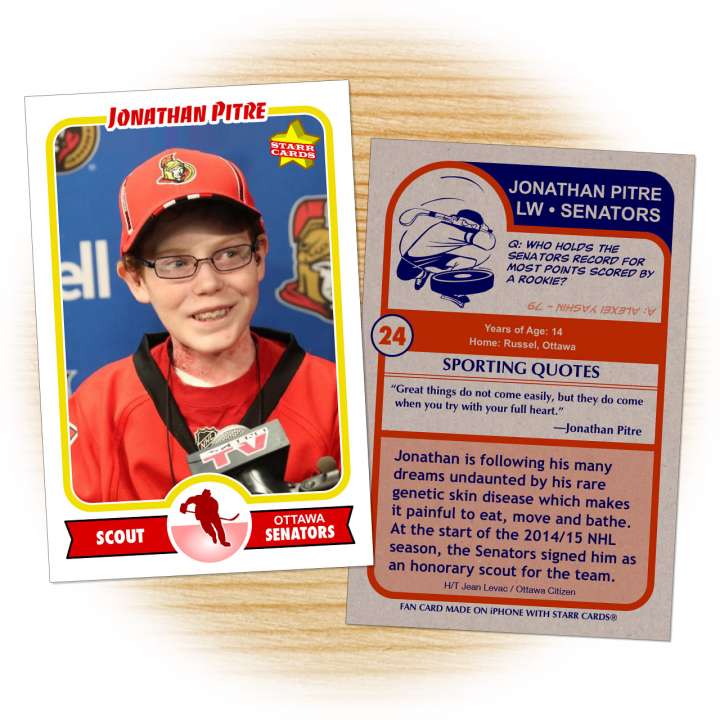