In 2016, Thor (aka Liam Hemsworth) managed to stay out of the civil war that ensnared other members of The Avengers, be he couldn’t resist an invitation to compete in a high-speed drone race with The Fly (aka Jeff Goldblum) and 4/5 of the Dude Perfect crew (Cody Jones is on paternity leave).

THOR VS THE FLY 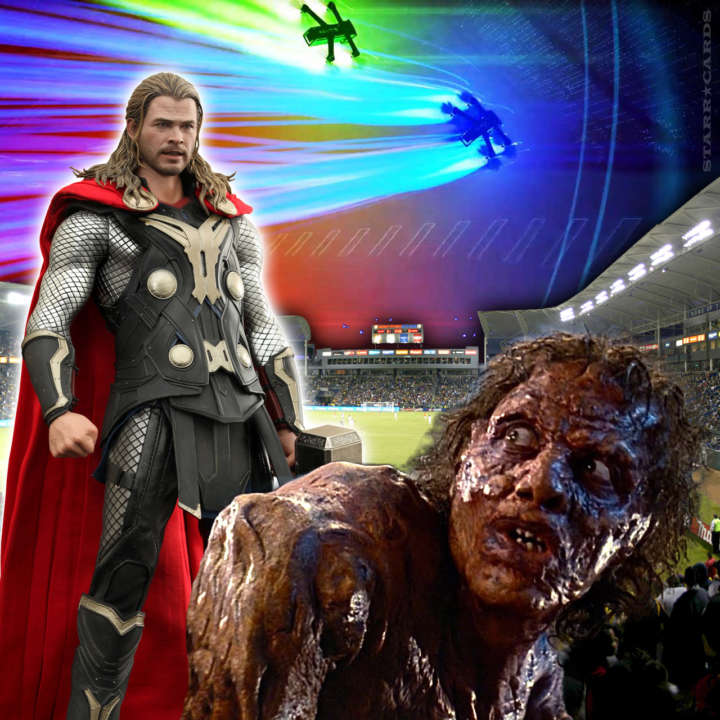 The venue for the showdown was the StubHub Center in Carson, California, home to Major League Soccer’s LA Galaxy. The course consisted of four major obstacles: two inflatable arches at opposite ends of the field, a long LED-lit tunnel and a couple of spasmodic air dancers flanking the finish line.

The Fly, despite his moniker, did not demonstrate the aeronautic skills to advance past the first round. Meanwhile, Thor breezed through the course to join Dude Perfect’s Tyler Toney, Cory Cotton and Garrett Hilbert in the final.

In the 2-lap final, Thor raced out to a galactic-sized lead, until his drone clipped the second archway, allowing Toney to claim yet another victory and the gilded-drone trophy.

Hemsworth and Goldblum stared in Independence Day: Resurgence, the long-anticipated sequel to the top-grossing film of 1996, Independence Day. For humanity’s sake, we can only hope that Earth’s survival isn’t linked to the pair’s drone-flying skills.