Jon Jones vs Daniel Cormier have been pencilled in to headline UFC 200, but for all intents and purposes, the main event has already been contested outside the octagon and featured the sport’s two most powerful men. In one corner was Conor McGregor, the UFC’s most popular and charismatic fighter. In the other corner was Dana White, the UFC’s president and ultimate fight maker. 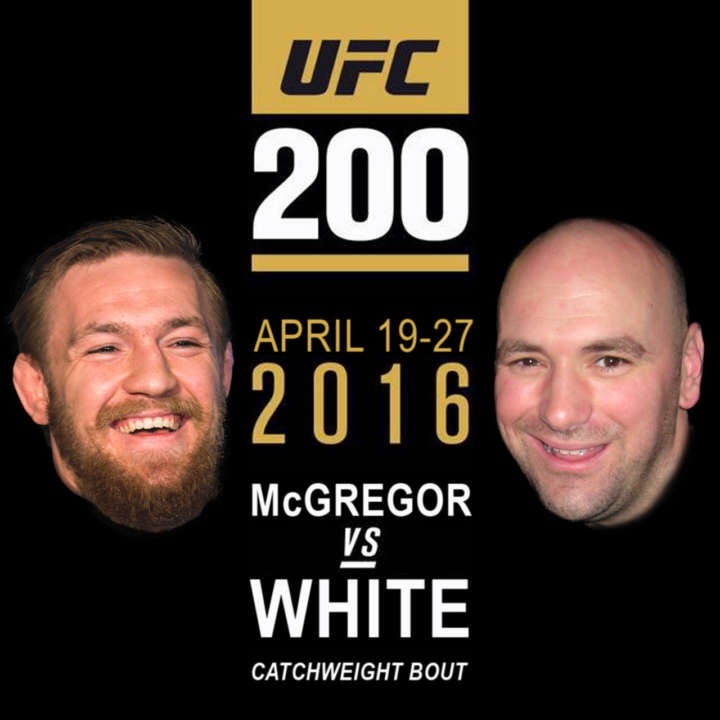 UFC 200 was supposed to be one of the biggest cards in MMA history and a celebration of the promotion’s ever growing popularity. Originally, the main event was to be a rematch between McGregor and Nate Diaz, but then the former dropped a bombshell.

On April 19th, McGregor tweeted out what appeared to be a retirement announcement.

I have decided to retire young.
Thanks for the cheese.
Catch ya's later.

When queried, White claimed not to know if McGregor was truly retired, but announced the fighter was being pulled from UFC 200 for refusing to fly to Las Vegas for a news conference and other promotional obligations.

''You have to do the press conference, so Conor put out that tweet. Is Conor McGregor retiring? Only he could answer that question.''

McGregor’s supposed retirement was short lived, as he tweeted a clarification to his original tweet just two days later.

Ok no more games.
I am going to release a statement shortly.

In a lengthy Facebook post, McGregor described a fighter no longer to play the promotional game at which he excels and intent on focusing only on the fight itself.

I am just trying to do my job and fight here. I am paid to fight. I am not yet paid to promote. I have become lost in the game of promotion and forgot about the art of fighting.

There comes a time when you need to stop handing out flyers and get back to the damn shop. 50 world tours, 200 press conferences, 1 million interviews, 2 million photo shoots, and at the end of it all I’m left looking down the barrel of a lens, staring defeat in the face, thinking of nothing but my incorrect fight preparation. And the many distractions that led to this. Nothing else was going through my mind. It is time to go back and live the life that got me this life.

Sitting in a car on the way to some dump in Conneticut or somewhere, to speak to Tim and Suzie on the nobody gives a fuck morning show did not get me this life. Talking to some lady that deep down doesn’t give a fuck about what I’m doing, but just wants some sound bites so she can maybe get her little tight ass a nice raise, and I’m cool with that too, I’ve been giving you all raises. But I need to focus on me now. I’m coming for my revenge here.

I flew an entire team to Portugal and to Iceland to make my adjustments in preparation and fix my errors I made with the weight and the cardio prep. With the right adjustments and the right focus, I will finish what I started in that last fight. I will not do this if I am back on the road handing out flyers again.

I will always play the game and play it better than anybody, but just for this one, where I am coming off a loss, I asked for some leeway where I can just train and focus. I did not shut down all media requests. I simply wanted a slight adjustment. But it was denied.

I must isolate myself now. I am facing a taller, longer and heavier man. I need to prepare correctly this time. I can not dance for you this time. It is time for the other monkeys to dance. I’ve danced us all the way here. Nate’s little mush head looks good up on that stage these days. Stuff him in front of the camera for it. He came in with no shit to do that last one. I’d already done press conferences, interviews and shot the ads before RDA pulled out. Maybe I’ll hit Cabo this time and skull some shots pre-fight with no obligation.

I’m doing what I need for me now. It is time to be selfish with my training again. It is the only way. I feel the $400 million I have generated for the company in my last three events, all inside 8 months, is enough to get me this slight leeway.

I am still ready to go for UFC 200. I will offer, like I already did, to fly to New York for the big press conference that was scheduled, and then I will go back into training. With no distractions.

If this is not enough or they feel I have not deserved to sit this promotion run out this one time, well then I don’t know what to say.
For the record also – For USADA and for the UFC and my contract stipulations – I AM NOT RETIRED.

Shortly thereafter, McGregor posted a shot of himself standing on a brick-lined street in Iceland. It was accompanied with a cocksure message that betrayed his uncertainty about the hand he had played.

I've got my bills paid. My money made. And the entire game slayed. #YourMove

White, for his part, did not indicate he was going to reconsider ousting McGregor from UFC 200.

With all the fighters assembled for the UFC 200 press conference save one, the question on the everyone’s mind was, “Where in the world is Conor McGregor?” Still on the outside looking in, McGregor watched the Vegas gathering from Iceland, while White was forced to play defense in explaining why the Irishman was no longer on the card.

McGregor live tweeted support for the fighters that broke training camp to fulfill their contractual obligations, while defending his decision not to attend. White, predictably, was unmoved.

Everyone flew in. Respect.
But not everyone up there made the company 400million in 8 months.

Two days after the press conference, with the UFC fanbase more or less resigned to the idea that McGregor truly was not going to appear at UFC 200, McGregor baited White once again with a tweet announcing he was back on the card.

Happy to announce that I am BACK on UFC 200!
Shout out to @danawhite and @lorenzofertitta on getting this one done for the fans. #Respect

Tracked down by TMZSports, White reiterated that McGregor was, in fact, not going to fight at UFC 200, but could appear again at any following event provided he fulfilled his media obligations as stipulated by the UFC.

A little over a week after McGregor’s opening salvo, White announced a new main event for UFC 200 — a light heavyweight title unification bout between Jon Jones and Daniel Cormier.

While it doesn’t offer the same cache as a McGregor vs Diaz tilt, Jones vs Cormier does promise a non-stop stream of entertaining trash talking leading up to their July 9 date in the octagon (and likely beyond).

It’s hard to declare any real winner in the McGregor vs White battle. Without a fighter’s union or another promotion to compete with the UFC’s effective monopoly, McGregor’s bargaining position was tenuous from the start. 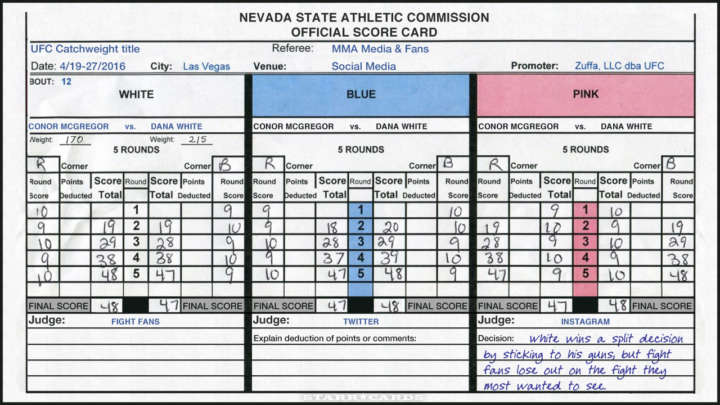 If McGregor vs White were decided on a score card it would be a split decision. While White was able to prevent a fighter from dictating terms, the UFC lost the fight fans most wanted to see from its premiere card. Still, it just means the pay-per-view will go through the roof for whichever subsequent event the Notorious MMA headlines. In the meantime, McGregor can kick back in any number of Icelandic hot springs.

As the Conor McGregor Army would say, “He who laughs (or tweets) last, laughs longest.”

"UFC 200 is just as good without @TheNotoriousMMA and will generate the same numbers." pic.twitter.com/XV6MsxeuYN