Who’s next in line for Conor McGregor after his fight with Floyd Mayweather?

Who’s next in line for Conor McGregor after his fight with Floyd Mayweather?

Last year was a wild, history-making year for MMA superstar Conor McGregor. In March, he was submitted in the second round by Nate Diaz, but in their August rematch, McGregor bounced back to out-point the “Stockton Slapper” in a thrilling 5-round slugfest. He capped off his octagon appearances for the year by dominating Eddie Alvarez at UFC 205 on way to becoming the first UFC fighter to simultaneously hold two belts.

Incredibly, this year has already been bigger than last year for McGregor, and he’s yet to step into the octagon. In May, he became a father to a bright-eyed baby boy, and in August he has a potential 9-figure payday coming up in his fight with legendary boxer Floyd Mayweather.

WHO’S NEXT FOR CONOR?

While everyone’s currently fixated on Mayweather vs McGregor, what fight, if any, will follow for McGregor? If he defies the odds and wins on August 26, it would make all the sense in the world for him to stick with boxing, with its bigger potential paydays — else a return to the UFC seems certain. 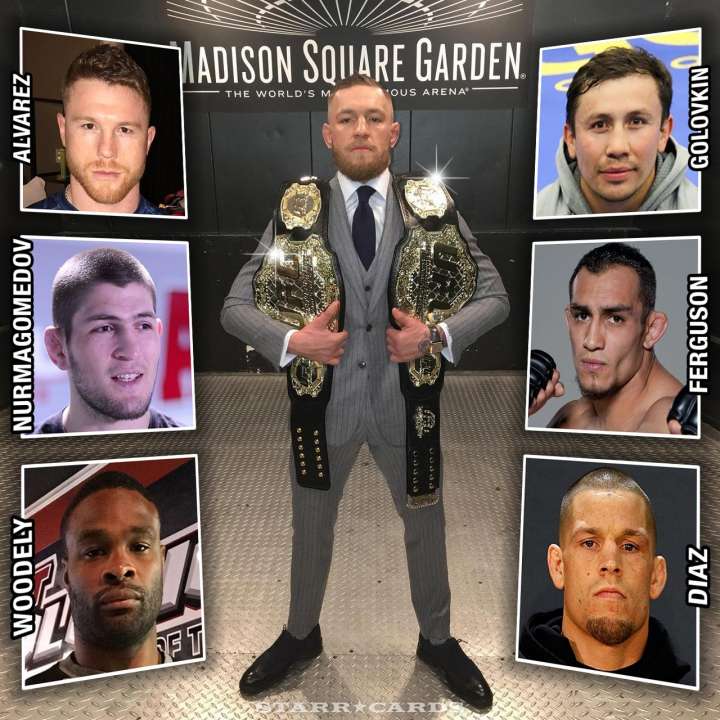 Here we look at potential next opponents for McGregor, with the first two being larger-than-life boxers that are set to meet in a megafight of their own in September, Saul Canelo Alvarez and Gennady Golovkin.

With his genuinely ginger hair, Alvarez — who hails from Gudalajara, Mexico — somehow manages to look more like an Irishman than McGregor. The lone loss of his 49-1-1 record came in 2013 to Mayweather on a majority decision.

Like McGregor, Alvarez is a snappy dresser and has the force of an entire country behind him. The two meeting for an open-air bout under the bright lights of Estadio Azteca in Mexico City has all the makings of a sure-fire iconic moment in the sport of boxing.

If Golovkin makes it by Alvarez, his record will stand at 38 wins and no losses. With 33 of his wins coming by knock out, he holds the highest KO percentage – 89.8% – in middleweight championship history.

Nurmagomedov, with a perfect 24-0 record, is the No. 1 contender in the UFC lightweight division. Currently training at the famed American Kickboxing Academy in San Jose, California, the two-time Combat Sambo World Champion was previously coached by his father at their home in Dagestan, Russia.

Stylistically, Nurmagomedov would probably pose the greatest challenge of all McGregor’s possible contenders. The Russian has shown the ability to eat a punch on way to throwing opponents to the canvas where he excels at the ground-and-pound game. And like Mayweather and Diaz, Nurmagomedov knows how to talk smack. Hurting his chances to face McGregor, is the fact that he missed weight for his UFC 209 fight with Ferguson.

Ferguson, with a perfect 22-3 MMA record, is the No. 2 contender in the UFC lightweight division behind Nurmagomedov. He is on a 9-bout win streak with his latest W coming in November over former champ Rafael dos Anjos.

From McGregor’s perspective, “El Cucuy” might make more sense than Nurmagomedov, as he prefers to keep fights upright where the Irishman is clearly at his best.

Tyron Woodley, the eleventh of thirteen siblings, hails from Ferguson, Missouri (the same Saint Louis suburb which saw large protests following Michael Brown’s shooting by a policeman). He was a football and wrestling star McCluer High School, before becoming a 2-time NCAA All-American wrestler for the Missouri Mizzou.

Woodley retained his UFC welterweight belt at UFC 205 in a hard-hitting majority draw decision against star-in-the-making Stephen Thompson and is scheduled for a rematch at UFC 209. For McGregor, the most appealing part of a possible Woodley bout would be the pursuit of a belt in yet another weight class.

Stockton, California native Nate Diaz sports a 19-11 MMA record, but his fearless demeanor inside the octagon makes him a bigger draw than fighters with far fewer losses.

In their first meeting, Diaz fought McGregor on short notice and came perilously close to being KO’d, before flipping the script and winning by submission. Their second fight went the distance and was about as entertaining as MMA can get, which bodes well for a high-grossing rubber match.