Unsurprisingly, Conor McGregor and Nate Diaz weren’t able to agree as to who had won their five-round classic brawl at UFC 202. Two of the three judges saw things McGregor’s way — and awarded him his coveted comeback win after being submitted by Diaz at UFC 196 — despite the brash Irishman being saved by bell at the end of both the third and fifth rounds.

The fighters did agree on one thing after the fight; both are anxious to get back their six-pack abs for a trilogy finale contested at 155 pounds. 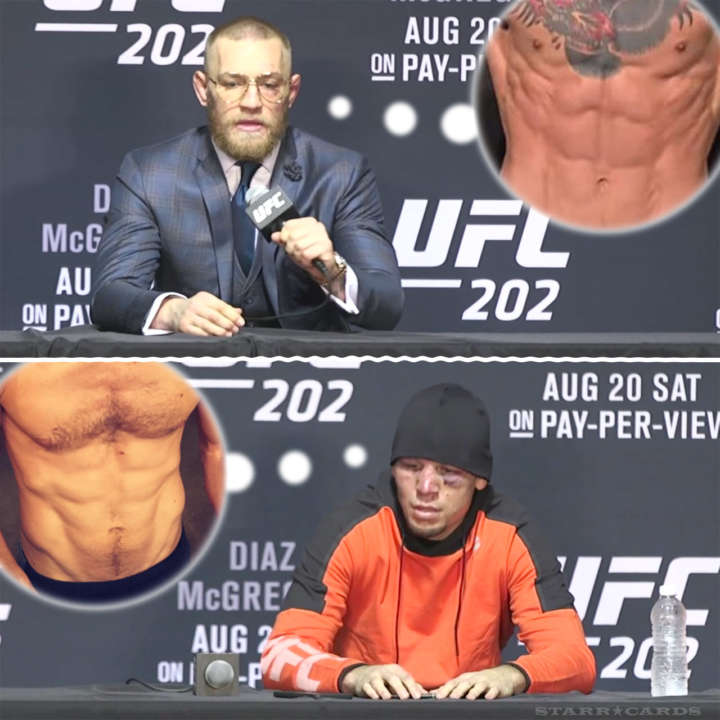 Fighting at 170-plus pounds had added just enough fat to rob them of the ripped abdominal definition they enjoyed fighting at lighter weights.

McGregor limped into his post-fight press conference on crutches after abusing his shin on Diaz’ knee for five rounds. He was uncharacteristically complimentary of Diaz after hurling assorted insults (and bottles) in the build up to the fight.

''He has that good flurry, but I was not wobbly. My senses were completely there, but he's a workhorse. He gets in and dogs it out.''

Diaz’ face looked pretty banged up after the fight, but he remained committed to going to the after party at the Light NightClub in Mandalay Bay. The Stockton-based southpaw also managed to get in a plug for vaping True CBD hemp oil, which purportedly helps the healing process by reducing inflammation.

''He ran the whole fight. You see me chasing him around that thing? I pointed at him, like 'where you going?' He's scared to engage, and I feel like they should have taken a point for that.''

Diaz said he is willing to wait for a rematch and the payday it would bring, while McGregor was circumspect in revealing what fight he will take next. Among McGregor’s options — aside from another date with Diaz — are dropping to 145 pounds to defend his UFC featherweight belt, taking a lucrative mega fight with boxer Floyd Mayweather, or moonlighting in the WWE after stirring the pot and being called out by Brock Lesnar.